Hadish-Adi in Its New Horizon 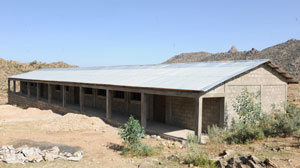 Constructed in 1991, Salina Primary School became a pioneering social service institution which enabled the inhabitants of Hadish-Adi gain access to education for the first time.  This very school opens the gate towards full-fledged development that embraces multi-dimensional advances.  What one could guess from this bit of information is that areas around Hadish-Adi never gained  access to any sort of social services for there was no infrastructure to provide such services.

A new junior school was constructed in 1996 and this was followed by additional secondary school constructed in 1998. This way, the inhabitants of Hadish-Adi started to receive varied sorts of services. As the access to education has been introduced in great deal, the major task of the administrative bodies has been to encourage as many students to join the newly opened schools so as to enable the them get benefited of the service that would be rendered there.

According to Mr. Zekarias Tedros, director of Hidri Junior and Secondary School, there are around 900 students who learn in this school and some of whom travel for about 15 km. So, the availability of effective transportation system has particularly benefited the students who come from distant areas.

At the very opening of the school, the main endeavor of the administrative bodies was to attract as many students and it has been very effective. With the ever-increasing number of students, however, Hidri Primary and

Secondary School has gradually reached to the point of not accommodating any extra number of students and therefore additional classes have been constructed to solve such a challenge. This school has a good laboratory, a library and also an ICT.

Lack of healthcare service and limited knowledge of advanced treatment were among the setbacks that influenced the health conditions of a number of people who reside in remote areas. Thus, healthcare service is another area in which much priority has been given. Constructed in 1992, Anseba Lemecheli Healthcare Center has been rendering healthcare services to around 11,000 people from 16 villages. This healthcare institution is among the first facilities opened in the post-independence period.

Nurse Dirar Ghebreab, head of Anseba Lemecheli Healthcare Center, said that the inhabitants of these areas used to have a very traditional way of treatment for they had limited knowledge of modern healthcare serve. Owing to the opening of healthcare institution and awareness raising programs carried out in the area, the prevalence of malaria which was very high before 2000 has now been totally controlled.

Development undertakings registered in Hadish-Adi administrative area and other remote areas of the country have alleviated a number of challenges but what has been achieved is a small portion of what could be done in the future. It has just lit the torch of development.

Nakfa: Symbol of resistance and perseverance of the Eritrean people part I