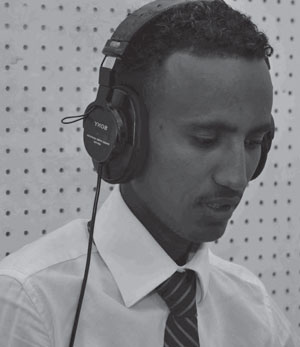 His full name is Ali Kalifa Husain, he is well known in the Eritrean Ministry of Information for his ability of speaking more than two Eritrean ethnic languages. He was born in 1989 in the Northern Red Sea region in the sub zone of Foro. He joined the 20th round for Sawa and he is currently working in the Eritrean radio station as a journalist.

-What did you do before becoming a journalist?

Honestly I had no dreams or plans of becoming a journalist but I was and still am the biggest fan of world wide news. But then when we first got assigned in the Ministry of Information and started some journalism courses it was a matter of time before I fell in love with my profession. Obviously at first I had a lot of complication as I was beginner in the whole thing but in time I got way better.

-You are quite famous among your coworkers for your multi language ability.

I am flattered. But yeah, I mean I know different ethnic languages it was kind of my hobby back when I was younger, it started as joke but am now making a living out of this skills.

-How did you learn them?

Tigre is my mother tongue; I studied Saho in elementary school.

–I am curios about these two languages; do they have similarities in between them?

No they don’t. They are very different; Tigre is closer to Tigrigna and Saho is similar to Afar. There is a huge difference also in the writing scheme: we use Geez alphabets in Tigre while in Saho we use Latin alphabets. So all in all they are widely different from one and other.

-You also know how to perfectly read, write and speak Afar. Right?

I do. Just like Arabic I learned Afar from daily bases, like news or books or anything else. If you want to master a language all that you need is desire. You have to have pure desire. That’s what I think helped me a lot in gaining the knowledge of the languages I know.

-Do you have any further languages that you would like to learn?

Yeah, definitely. The remaining three languages specially Kunama, Nara and Bilen languages. And in addition I would like to master English very well.

-how does it feel to be able to know different languages?

Feels like I am a multi functional journalist. Am just trying to be funny but honestly, it’s like you have more tools in life. And besides it gives me confidence in what I do meaning in my profession as a journalist.

-Do you mind sharing your future plans with our readers?

Well, I want to improve my skills specially in English I would like to master the “business “ and “lateral” English.

Thanks again for having me.

Peace in the battle field of the mind