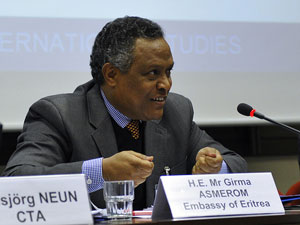 Eritrea’s Ambassador to the African Union (AU), Mr. Girma Asmerom, has called on the Union, as one of the guarantors of the Algiers Agreement of December 2000, to pay serious attention to the implementation of the Eritrea-Ethiopia Boundary Commission (EEBC)’s final and binding ruling.

Asmara, 30 January 2013 – Eritrea’s Ambassador to the African Union (AU), Mr. Girma Asmerom, has called on the Union, as one of the guarantors of the Algiers Agreement of December 2000, to pay serious attention to the implementation of the Eritrea-Ethiopia Boundary Commission (EEBC)’s final and binding ruling.

Ambassador Girma made the call in a speech he delivered at the African Union Summit which convened in Addis Ababa on 28 January 2013.  He emphasized that despite the fact that the Eritrea-Ethiopia border issue has reached legal conclusion in accordance with the EEBC’s ruling on the basis of the Algiers Peace Agreement, sovereign Eritrean territories, including the town of Badme, still remain under Ethiopian occupation, thus attesting to the AU’s failure to live up to its responsibility. Ambassador Girma further reminded the Union to play its due role as regards bringing an end to Ethiopia’s continued occupation of sovereign Eritrean territories, and thereby promote peace and stability in the entire Horn of Africa region.

Stressing that the Eritrea-Ethiopia border dispute has been resolved through the Final and Binding arbitration ten years ago, the Eritrean Ambassador to the AU underscored that the problem has nothing to do with the issue of “political will” or “dialogue.” As such, attempts to push the two parties to go back to so-called “dialogue and the negotiating table” are but acts designed to derail and frustrate the legally and conclusively resolved border issue. In this connection, the misguided US policy is holding peace hostage in Eritrea and Ethiopia, and the Horn region as a whole, Mr. Girma Asmerom underlined.

Explaining Eritrea’s clear stance as regards resolving the Somalia issue, Ambassador Girma called on all external parties to back up endeavors towards bringing about a lasting and all-inclusive peace and reconciliation process in that country.

He noted that the current approach of internationalizing the issue between the two Sudans rather than bringing about solutions will only complicate the problem further. The Eritrean Ambassador to the AU also emphasized the need to give prominence to the long-term interests of the peoples of both countries over and above any other interest.