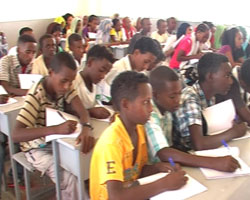 The Anseba region is a multicultural center where three of the nine ethnic groups of Eritrea live in. Cultural diversity is indeed the region’s greatest asset. Most of the round 432 thousands inhabitants of the region live in villages and therefore are engaged in farm activities. Only about 29 % of the total number of the inhabitants of the region which comprise the ethnic groups of Bilen, Tigre and Tigrigna engage in different economic sectors.

A glimpse to the development programs implanted so far to change the living standards of the inhabitants of the region could give a clue about the region’s overall economic and social transformation.

Around 64 hectares was cultivated in 2012 in the Anseba region. However, as was impacted by uneven distribution of rainfall, much of agricultural output was gained from dairy farms. Even though practiced in different areas of the region, the sub-zones of Kerkebet, Sele’a, Habero, and Asmat are well-known for conducting extensive livestock activities. Therefore, most sub-zones of the region have been working towards securing economic growth relaying mostly in livestock and vegetables and fruits farms. As they found it very rewarding they earn their living through livestock marketing.

Through extensive farming activities carried out in 2012, around 132,000 quintals of fruits and vegetables was harvested in the Anseba region. It is to be noted that, other than agriculture, the region exerts efforts to meet food security demands through the development of different economic sectors.

The endeavors that have been exerted to boost economic growth of the region still remain commendable, but the utmost effort made towards the expansion of varied service giving institutions remains beyond compare.  Most of the educational institutions built in the post-independence period have been offering services in Blien, Tigrigna, Hidareb, Tigre, and Arabic languages. Hence, though not in its best stage, access to education is in a

good condition. There is indeed a gap between the envisaged goal and what is achieved so far. Thus, the need for exerting extra effort is still a necessity if the cherished desire of providing a broader and effective educational service is to be realized.

In line with improving the living standards of the inhabitants, regrouping of scattered villages to one central area has been among the major successes achieved in the region. According to Mr. Ghergish Girmay, Administrator of Anseba Region, 90% of the inhalants of the region have become beneficiaries of the educational opportunities so far provided. “So, we are making better development strides” He said.

Regardless of how fast or slow something progresses; any sort of achievement is viewed as a positive development. One could not miss to see the gradual progress made in the region’s provision of transportation service. Despite all advances registered in different sectors, the need for effective transportation system has not yet been fully addressed. “Everything has been fulfilled with the exception of transportation facilities” is what the inhabitants of the region could say to a visitor who wishes to know about the development achievements registered in the region. But, what makes the transportation facility lag behind as compared to other accomplishment is mostly geographical challenge. Most areas of the region are very mountainous and such geographical challenges delays the construction of viable roads network and hence negatively impacts to the overall transportation facility.

Notwithstanding transportation challenges, much has been done in the region. Owing to Governments efforts to provide viable services, most villages of the region have gained access to portable water at ease.

Healthcare service is what the inhabitants of the region highly appreciate. There are different healthcare institutions everywhere in the region and every inhabitant has become beneficiary of the services provided.

The AU and Its Obligation

It is more than just “a drop of tear”