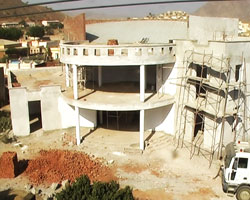 The National Union of Eritrean Women (NUEW) branch in Anseba region indicated that the construction of women’s training center in Keren has gained momentum.

Keren, 1 February 2013 – The National Union of Eritrean Women (NUEW) branch in Anseba region indicated that the construction of women’s training center in Keren has gained momentum. The two-storey-building being constructed at an expenditure of 20 million Nakfa comprises offices, a hall which can accommodate 500 people, and cafeteria as well as daycare room.

Ms. Asha Alinur, head of the branch office, pointed out that the project of the training center’s construction was fully funded by the Union’s members residing in Italy. Accordingly, similar initiatives were taken by NUEW members living in the Saudi-Arabian cities of Riyadh and Jeddah to construct training centers in Asmat and Elabered semi-urban centers respectively. She further expressed conviction that the availability of such center would make significant impact in raising the production capacity of women, and lauded the active participation of members in the process.

Furthermore, Ms. Asha said that endeavors exerted towards promoting socio-economic activities of women have ensured positive outcome, and commended the members who extended support to the construction of the centers.