Nakfa: Symbol of resistance and perseverance of the Eritrean people Part II 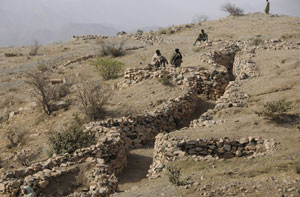 The Dergue regime although driven out from Nakfa and its environs didn’t totally give up to attempt to regain it and if possible to wipe out the resistance ones and for all. And for that several attempts were made and each to no avail. The Derge attempts are known by the liberation fighter as first, second, the number of invesions go through the Six Offensive, what the Derge regime call Kei-Kokeb Operation.

The first military offensive was launched on the 13th of June, 1978, from four fronts. The first front was launched by 503 task force from Girhu Sernay, with the assignment to go all the way through Tsorena, and Dekemhare.

The second front through Ksad Ika, Adi Quala, and Mendefera, in its way wiping out the EPLF forces. The third front was by 502 task force assigned to march all the way through Shambuko and Gash to Barentu.

The 501 task force was assigned to capture Tesenei through Omhajer. At fifth front the 505 task force came with assignment to clear the EPLF forces stationed in Semhar plains. The sixth front was through Dogali strait to the north, Nakfa.

All the Derge military operations from the five fronts were not able to hit their target due to the strong resistance they encountered from the liberation forces. The Derge regime had not the slightest clue that it would launch seven military operations. It was so convinced, with the huge supply of arms it received from the Soviets and others; it will crash the armed struggle for independence within days of the first offensive.

However, the reality on the ground was very different; it was faced with determined and steadfast forces and was forced to give up its offensive until it reinforces its much weakened military supplies and personnel. The first

military offensive was foiled within days.

The second military offensive was launched some months later after the failed 1st offensive from three fronts, north, east, and west. From the north through Adi Yakob; from the east through Dogali and from the west through Ingerne to Afabet. The wise decision of the EPLF leadership to strategically withdraw during this operation was one of the heavy blows to the Derge’s appetite, which believed ones again that it will crash the movement once and for all. With its second military offensive the Derge regime remained empty handed and did not realize what the EPLF had in mind in conducting strategic withdrawal.

The third military offensive which was in January 1979 was to control Afabet and the north east Sahel and finally recapture Nakfa, which they have never been able to do so for years. It was during this operation that the Denden trenches and the Sahel front that we proudly talk about today were created.

The fourth military offensive was aimed at penetrating the strong hold of Nakfa trenches. During this operation the Derge regime was so desperate that it was launching around 15 operations per day, and with no result except heavy human and material loses. In the fifth military offensive the Derge regime was so exhausted that it was forces to bring soldiers from other places of Ethiopia to try to do something. But the fifth offensive was also crashed like those other offensives. The Derge regime realized that with the emptied energy it had it could do nothing to regain the balance of power to fight the gallant liberation fighter had to take 2 years for preparation for another military operation.