The anti-colonial political and military struggle 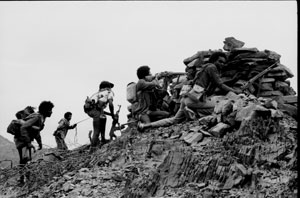 The national struggle of the Eritrean people was a fight against “Ethiopian” colonial regimes which were driven by empire building ambitions and supported by international colonialist forces. The struggle continued as long as the imperial dreams and the interests that underlie them persist. The Dergue’s regime, its policies and actions should be examined from this perspective. And so has the Dergue’s seizure of power brought change in Ethiopia?

A regime could be substituted by another and there could be difference in form and style between one regime and another. However, change in the system could only occur if there is a transformation of its essence. A snake does not cease to be a snake because, it has molted.

The backward and autocratic regime of Haile Selassie with the support of world colonialist forces, trampled on the fundamental human and democratic rights and particularly the national rights of the people of Ethiopia so as to ensure the dominance of one nationality, the Amhara. In addition, it strove to colonialize the people of Horn of Africa and especially Eritrea in order to realize its expansionist dreams. It also appropriated the wealth and in the first place the land of the Ethiopian people turning into the private property of the imperial family and the feudal aristocracy and causing misery. It was therefore, natural that the struggles of the Eritrean people and the peoples of Ethiopia should over throw the regime of Haile Selassie. But did the fall of Haile Selassie achieve the objectives of the struggles? This is a question that can only be answered by examining the Dergue, its policies.

Briefly speaking, if there was anything the Dergue had attempted to strengthen the efforts at empire-building which it inherited from Haile Selassie. At first the Dergue found it expedient to condemning the misery of the Ethiopian people. Not because it upheld the legitimate causes of the two people but because it was not in a position to confront them head on as it had not yet consolidate its power. Its initial move to institute a hybrid constitutional monarchy by raising the meaning less slogan of “Ethiopia Tikdem” (Ethiopia first) was thwarted by a broad popular opposition. Toward the end of 1974 it raised another equally senseless slogan, that of “Ethiopian Socialism”, feeling that this would echo the demands of the people. As the politicalized student body was challenging the regime and agitating against its empty and deceptive slogans, the Dergue introduced in the guise of development and concurrently with its proclamation of “Ethiopian Socialism”, the “Zemetcha” (campaign) program and dispersed throughout the country all university and high school students and their teachers. This however, failed to achieve the Dergue’s objectives. On the contrary, it facilitated the spreading of the opposition and strengthened the channelings of the regime. In the March 1975, the Dergue issued a proclamation to nationalize rural lands. In the second half of 1975 of July to be exact it proclaimed the expropriation of all urban lands and buildings. It simultaneously initiated the establishment of urban and rural “Kebeles” to better control the popular opposition. As a finale it issued its documentation of “National Democratic Revolution” in the second quarter April of 1976. Towards the end of 1976 (October), the regime convertd the Kebeles into organs of “Red Terror”. By then, what the Dergue touted as a “Bloodless Revolution” had turned to be bloody and terroristic.

The AU and Its Obligation