Nakfa: Symbol of resistance and perseverance of the Eritrean people Part III 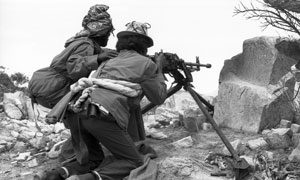 February 1982 was the launch of the much anticipated 6th (what the Derge regime call Red Star) military operation. This offensive was the highest of all offensives ever launched by the Ethiopian regimes against the Eritrean revolution. For two years on, after the fall of the 5th military offensive, the Derge regime took two solid years to train new recruits and procure military hardware before going to another try.

Before actually engaging itself in combat, the Derge had to use different propaganda means including distributing pamphlets, disseminating messages through its mass media and terrorizing the population through different means. The slogans that were being disseminated then were aimed at terrorizing the population in a bid they will disassociate themselves from their sons and daughters. It was also to incur terror and suspicion among the combatants of the EPLF forces. The Derge regime, mislead by the power it assumed it had, was

confident to annihilate the Eritrean liberation forces from the face of the earth.

The Derge regime was armed to the teeth and had the backing of some major superpowers to the extent of having Soviet military advisors in the frontline. With the propaganda that the regime was disseminating many believed that it was the end of the Eritrean people’s struggle for independence and the revolution will remain confined to only to the books of history. And some were seen to shift sides with the Derge regime convinced by the propaganda the regime was disseminating.

The 6th military offensive was launched from all sides of Sahel front. The fighting was so fierce that it took months to quell it and ultimately exhaust and kill the fire power and morale of the enemy forces.

Before the launch of the offensive the EPLF leadership was well aware of the plan and intent of the Derge regime and was conducting sporadic attacks from behind the enemy position and in the frontline. With those sporadic attacks the EPLF forces were able to minimize and break the morale and capacity of the enemy forces.