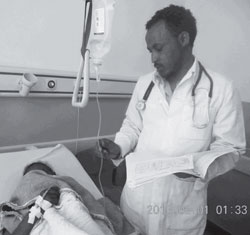 Today’s interview is with one of the youngest doctors of Orota hospital. Doctor Estifanos Haile after a long journey and hardship of becoming a doctor realized just in the end that the motto that you have to keep in mind to become an exceptional doctor is “first humanity second medicine”.

-Can you tell us a bit about your background?

I was born in the sub-zone of Areza in 1983. In 2003 I joined the 17th round to Sawa and there I got a high mark that allowed me to achieve my dream into getting into medical school.
When I got back to Asmara I started some pre-medicine courses at the Mai-Nefhi College for two years, and later on I got into the Orota School of Medicine. I finally graduated in 2012.

-How did your desire of becoming a doctor start?

To be honest it was my childhood fantasy. As a kid I would always play around dressed up as a doctor with my little stethoscope. But this fantasy became a life time goal for me when in 6th grade I had to face a rather life changing experience: near to my home town there was this clinic in which critically war injured soldiers received treatment. And one day it happened to be one of those days where there were ongoing wars and the clinic was overflowing with patients. Everybody that leaved around there helped in any way they could. I tagged along with my school mates that were few years older than me and learned 1st aid.  Even though I didn’t do much I felt in debt to be someone for my society.

-What about your parents?

My parents have a very important role in my life as they encourage me in every step that I take. They sent me to school regardless the money issues we had; my parents are humble farmers in the countryside. Back when I was a kid I used to help them out but they would never let me, they had bigger dreams for me than I had for myself.

-Do you think your parents dream came true?

They expected me to go this far so yes. But it is not the end for me so I think they will see more of me.

-Ok. So how was medical school?

It was emotional. Especially the last two years because as interns we got in touch with our “first” patients. And this is when we got to learn that aside for the medical answers to be a real doctor you need to get to know your patients in a rather personal and more intimate level. Apart from that medical school was really interesting, it is in fact one of the few experiences that I won’t forget.

-What do you think of your job?

I believe that every occupation has its own significance. But when it comes to being a doctor I think it is more profound as you get to deal with human lives. Many times you are found in a life or death decision… and sometimes you even get to think of giving your own life. It is a very sentimental profession.

-What can you tell us about hospitals in Eritrea?

Well, honestly I think we have enough man power and hospitals are being built with a wide distribution around the country but I still think that there are some things that should be fixed and I am sure that they will in a very short while, because so far the medical progress in our country has been significant.

-Do you have anything else that you would like to say?

Yeah, there is one thing. I would like to encourage our youth to keep on doing what they have been doing so far in making our country a stronger and wealthier nation for generations to come.

-Thanks for being here and good luck.

The historical religion sites in Asmara