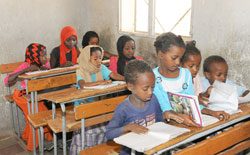 Situated some 160 km on the north east of Keren, Sele’a sub-zone is a home to around 15 thousand inhabitants from the Tigre and Hidareb ethnic groups of Eritrea. This sub-zone was once a haven to freedom fighters. This time, Sele’a sub-zone possesses historic places and varied types of wild animals. Most of the inhabitants of the 27 villages of this sub-zone earn their living as pastoralists.

Providing social services to people who lead nomadic and semi-nomadic lifestyle is indeed quite demanding. However, the inhabitants of this sub-zone should get at least the most basic services have been the utmost priority.
The inhabitants of Sele’a sub-zone gain access to different social services in Rikeb semi-urban center. As most of the inhabitants don’t have permanent dwellings, the major task of the administration of Sele’a sub-zone has been to enable the inhabitants change their lifestyle and thereby to become beneficiaries of the services that have been provided in the sub-zone.
Lack of potable water was the primary challenge which used to cause dire healthcare consequence. With the setting up of three potable water distribution centers in Rikeb sub-zone, a number of challenges have been alleviated. Besides, the three water distribution center additional three wells have also been dug. Among the inhabitants who requested for direct water pipelines have now started to make maximum use of the service in their respective households.

Even though much has been done in the provision of potable water, deficiency in transportation system is still a big concern that needs to be addressed.  There are still uneven roads that seek due attention and the three

buses that have been giving services there would be endangered if the roads over there continue to be in a shabby condition.

It was only in 1998 that the Sele’a sub-zone gained access to education. As there was limited awareness on the benefits of education, much effort has been exerted to encourage the inhabitants send their children to

schools. Owing to the concerted efforts exerted towards educational development, this time, two kindergartens, seven primary and a junior schools have been opened in the sub-zone.  In the primary and secondary schools, 30 teachers have been playing due role in the transfer of knowledge to 586 students. The yet educational challenge of the sub-zone is the nomadic lifestyle of the inhabitants. Thus, there still remains a long way to go so as to change such lifestyle and to attract as many students to join schools. Given the fact that the inhabitants of Selea’a live nomadic life, adult literacy program is among the measures that have been taken to eradicate illiteracy among senior citizens of the sub-zone.

A healthcare center which was constructed in 1996 has started to address health related issues of the sub-zone. Since its very opening, the healthcare center has been giving commendable service. This healthcare institution has solar powered supply of electricity. The only problem of the sub-zone as regards healthcare issue is lack of permanent settlement due to the nomadic nature of livelihood.  To address such a challenge mobile medication service has been given to reach out even distant and unreachable areas.

With the introduction of educational and medical as well as transportation and provision of potable water, the inhabitants of Sele’a sub-zone have started to lead better life. But, much could be done if the inhabitants start to live in permanent settlements.

Managerial dimensions in the perspectives of Quantity and Quality Part I