The historical religion sites in Asmara 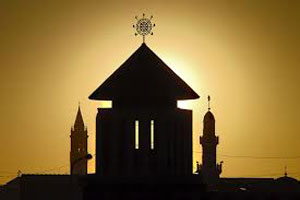 Asmara’s very diverse cultural heritage is obvious: three of the most prominent landmarks in the city are the Cathedral Catholic Church, the Al Khulafa Al Rashiudin Mosque and the Nda Mariam Coptic Cathedral. In a world characterized by religious conflict, Christians, Muslims and others have lived peacefully together in Asmara, and in the rest of the country, for centuries.

The religious sites around the city give Asmara a very wonderful vibe to its urban construction. We will try to see briefly the harmonic setting of these Holy places.

The cathedral of Asmara was built in 1922 in the Lombard-Romanesque style. Its tall Gothic bell tower is visible from everywhere in the city and is a useful landmark if you ever lose your sense of direction. The Cathedral, as well as the primary school, the monastery and the nunnery, are in the same compound and can be visited. It is also possible to climb the 52 meter tower of the Cathedral to enjoy an exquisite view over Asmara, especially at the whole hours when the bells sound. It is really spectacular.

Al Khulafa Al Rashiudin (Followers of the Right Path), was built in 1938 from Dekemhare travertine and Carrera marble. There is a square in front of the mosque paved with blocks of dark stone arranged in geometrical

patterns.  Beautiful as it is it is one of the most important religious sites in Eritrea, the Al Khulafa Al Rashiudin Mosque is on the Selam Street located near Asmara’s covered markets (Marcato) and lies at the head of a large square

The main building is composed of three massive elements, slightly up the hill, which makes it another useful landmark in Asmara.

To the left and the right of the main body there are two soaring towers, each supporting a white construction which contains the church bells. On top of these structures, cylinder shaped brickwork supports a concrete tukul.

Above the two wooden doors, which have frames of red ceramic tesserae, there is an impressive mosaic structure showing religious scenes done by the Italian painter Nenne Sanguineti Poggi, on request of the clergy, in the 1950s. She is also the creator of several mosaics and frescos around Asmara.

In front of the Church are traditional stones which were used as bells. They create a very heart touching and memorable sound every time they ring. Inside the Church, you will find lovely murals of the apostles, scenes from the life of Christ and stories from the Old and New Testament. The saint’s name is celebrated each month by the Church congregation, and once a year in a festival.

While Kidane Meheret, the principal Church of Oriental Christian rite. It has beautiful frescoed walls which feature the “Madonna of Perpetual Help” and the nine monks that Christianized the highlands of Eritrea, painted in Italy by a Cappuccino brother. It is situated behind the central market.

There is also the Synagogue of Asmara built in 1906. It is a beautiful, serene building just off the main street. The wooden cornices and fittings are hand carved and the scrolls of the Torah are hand written.