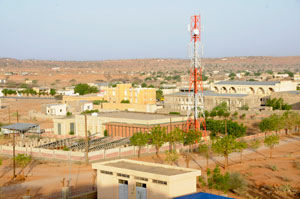 The Administration of the Eritrean Telecommunications Corporation (EriTel) has indicated that it has begun to sell shares in line with the ongoing endeavor of privatizing it.

Asmara, 12 February 2013 – The Administration of the Eritrean Telecommunications Corporation (EriTel) has indicated that it has begun to sell shares in line with the ongoing endeavor of privatizing it. It is to be recalled that the Corporation distributed application forms to a

Accordingly, it has made available 4.5 million shares for sale, and the marketing endeavor has already drawn impressive number of shareholders so far.

Commerce Bank, as well as the Commercial Bank of Eritrea. It further called on interested citizens residing abroad to double-check equivalence of the foreign currency amounts they debit to the banks with the price of shares they buy, which has already been indicated in terms of US dollars.

Individual citizens can buy up to 50,000 shares, while businesses and Associations can purchase up to 500,000 shares, given 10 as the lowest permissible number of shares for sales. Moreover, EriTel has opened special accounts at the aforementioned banks so as to serve the purpose, and related transactions are possible only through those accounts, according to previous reports.