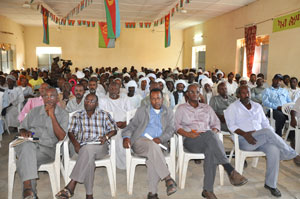 The Administration of Tesenei sub-zone indicated that various development programs would be implemented in the locality this year at a total expenditure of around 28 million Nakfa.

Tesenei, 13 February 2013 – The Administration of Tesenei sub-zone indicated that various development programs would be implemented in the locality this year at a total expenditure of around 28 million Nakfa. It made the statement at an assessment meeting during which it was stated that further endeavors would also be exerted pertinent to facilitation of Tesenei city’s master plan vis-à-vis that of Aligidir and Fanko areas, soil and water conservation, as well as management of  grass enclosures and livestock.

Mr. Teklebirhan Gebrewold, Administrator of the sub-zone, explained that commendable accomplishments have been registered as regards the putting in place of infrastructures, agriculture and rehabilitation of families of martyrs, among others.

Accordingly, a modern market place is being built in Sug-Asha’abi, a major area in the heart of Tesenei city, and several dirt roads within the city have been renovated so as to avoid swamps during the rainy season. Besides, successful soil and water conservation activities have been undertaken in Fanko, Tesenei and Aligidir Administrative areas on the basis of popular participation, while efforts made to avoid instance of malaria infection have resulted in positive outcome.

Reports indicate that more than 16,000 hectares were cultivated during the rainy season, and the inhabitants of the sub-zone extended 800,000 Nakfa with a view to rehabilitating families of fallen heroes.

The participants of the meeting on their part put forth views as regards various issues.