Nakfa: Symbol of resistance and perseverance of the Eritrean people Part IV 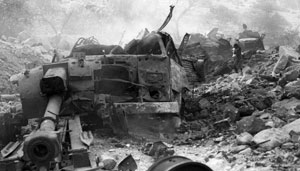 The Derge’s mission impossible led to the defeat of its forces and its army into despair. After the devastating defeat of the Derge regime at the hands of the EPLF fighters it gave up its attempts to try to engage itself in a fight and confined into defensive position in and around Afabet and in other areas far from the strongholds of the EPLF around Nakfa.

Some people compare the 6th offensive of the Derge regime to penetrate the Sahl EPLF trenches as the battle between David and Goliath. The fierceness of the battle

Rigole is an Italian word meaning penalty kick like that of the football game; and the name was given to indicate how close the trenches of the enemy were to that of the EPLF combatants. In some places the trenches were some meters apart that both sides could listen to every word uttered by all sides. With time even both sides could call each others with their names. Could any one imagine staying for months some meters away from the enemy trenches with all the grenades and hand bombs falling on you? Only those who happened physically there could explain the ferocity of the struggle and the endurance that was needed.