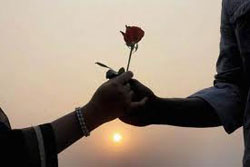 The fourteenth day of the month of February has millions across the world presenting their loved ones with candy, flowers, chocolates and other lovely gifts. In many countries, restaurants and eateries are seen to be filled with couples who are eager to celebrate their relationship and the joy of their togetherness.

The reason behind all of this is a kindly cleric named Valentine who died more than a thousand years ago.

The modern St. Valentine’s Day celebrations are said to have been derived from both ancient Christian and Roman tradition. One of those legends say that this holiday has

originated from the ancient Roman festival of Lupercalis/Lupercalia, a fertility celebration that used to observed annually on February 15. But the rise of Christianity in Europe saw many pagan holidays being renamed for and dedicated to the early Christian martyrs. Lupercalia was no exception. In 496 AD, Pope Gelasius turned Lupercalia into a Christian feast day and set its observance a day earlier, on February 14. He proclaimed February 14 to be the feast day in honor of Saint Valentine, a Roman martyr who lived in the 3rd century. It is this St. Valentine whom the modern Valentine’s Day honors.

According to history, there were at least three early Christian saints by the name of Valentine. While one was a priest in Rome, another was a bishop in Terni. Nothing is known about the third St. Valentine except that he met his end in Africa. Surprisingly, all three of them were said to have been martyred on 14th February.

It is clear that Pope Gelasius intended to honor the first of these three aforementioned men. Most scholars believe that this St. Valentine was a priest who lived around 270 AD in Rome and attracted the unpopularity of Roman emperor Claudius II who ruled during this time.

The story of St. Valentine has two different versions: the Protestant and the Catholic one. Both versions agree upon Saint Valentine being a bishop who held secret marriage ceremonies of soldiers in opposition to Claudius II who had prohibited marriage for young men. Because as Claudius became the emperor, he felt that married men were more emotionally attached to their families, and they will not make good soldiers. He believed that marriage made the men weak. So he issued an edict forbidding marriage to assure quality soldiers.

The ban on marriage was a great shock for the Romans. But they could not say anything regarding the issue. The bishop Valentine though could not allow himself to just seat back and watch the trauma of young lovers who gave up all hopes of being united in marriage. So he planned to counter the monarch’s orders in secrecy. Whenever lovers thought of marrying, they go to Valentine who met them afterwards in a secret place, and joined them in the sacrament of matrimony. With time and many marriages such things could not remain hidden for long. And when Claudius found out he had him arrested.

While awaiting his sentence in prison, Valentine was approached by his jailor, Asterius. It was said that Valentine had some saintly abilities and one of them granted him the power to heal people. Asterius had a blind daughter and knowing of the miraculous powers of Valentine he requested the latter to restore the sight of his blind daughter. The Catholic legend has it that Valentine did this through the vehicle of his strong faith and succeeded in helping the daughter of Asterius.

Ever since then every year in recognition of this saint, differently from the other 364 days, this particular day is reserved for lovers.