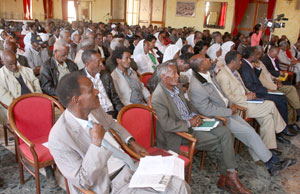 Mr. Abraham Semere, Chairman of the Assembly, explained that the government is exerting stepped up endeavors to improve the livelihood of citizens and ensure food security, and that the regional Assembly has been backing the implementation of the programs to this end. He further indicated that integrated efforts of government bodies is a major prerequisite in this regard vis-à-vis community participation.

Accordingly, the year 2012 was a period for remarkable developmental move in line with the introduction of new machineries targeting agriculture, construction and transport domains, and more ventures should be carried out as regards soil and water conservation, afforestation and ensuring food security.

Following the presentation of reports by committees, the Assembly assessed several issues that had been identified as current challenges in the previous meeting. Besides, the meeting pointed out that afforestation activities executed through popular undertaking have made positive impact, and underlined the need for extending wood enclosures.

Furthermore, the Assembly conducted discussion on the reports presented, and adopted decisions pertaining to renovation of roads and other public infrastructures in Asmara city, as well as water management, among others.