“The Eritrean People Have Never Being Led Astray By Lies And Deception”: President Isaias Afwerki 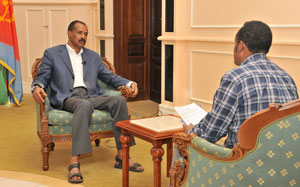 It is to be recalled that President Isaias  conducted  an  interview with  the  local  Medias  as  regards the  ‘21  January  2013  incident.’ Excerpts of the first part follow:

-Mr.  President,  in  this  occasion of the Cabinet ministers meeting, I  have  a  few  questions  about  the “January 21 incident”. Previously you  have  stated  that  there  was nothing  to  worry  about  this incident. However, different media outlets disseminated different news about the incident, mostly relying upon  speculations.  Therefore,  to give precise information to people, tell us what really happened.

It  was  not  something  that  happened  in  closed  caves  or  in another  continent,  everybody knows it. We can only explain what the  situation  was  at  the  time,  and we  don’t  want  to  give  analysis  or invent  a  story.  If anyone wants  to  day-dream, he can do so. At  that  time  we  had  a  meeting here  when  we  were  told  that ‘something  happened  in  the premises  of  the  ministry  of information’.  It was  unexpected and  nobody  knew  anything  about it. We needed to study the situation and decided not to rush in to giving  hasty  explanation  or  reaction.  It was then decided that we needed to contact these people and hence sent  the commander of the Mechanized Unit to talk to them. One of the key

leaders  of  the  incident  (in  fact  we cannot say there were key leaders) fired and shot him. People were  not worried that much. We were all here together. Most of the ministers were  here. We  decided  that  it  was wrong  and  that  it  was  premature; so there was no need for that much reaction or haste from our part. We spent the whole day deliberating on the  issue.  Anyone  who  was  there knows  what  kind  of  a  drama  the incident was. I don’t think there is any point in talking much about it.

The main point here is that the fact that the people who the orchestrators misinformed  and  misled  in  to  joining  the  incident  deserted  them in  the  afternoon. They  returned  to their  places.  It  is  even  hard  to  say that  the  orchestrators  themselves knew about what they were doing. While one of them was ordering to fire, another was opposing; so it is difficult to make sense out of the situation. You can only explain the situation as it was. In any case, we decided to follow the situation with patience and that there was no need to  resort  to  any  kind  of  reaction; we were here till sunset when they left  the  place.  Finally,  when  the person they sent to the ministry of information left them, they tried to escape  with  a  getaway  car.  It  was known where they were going but we  decided  that  it  was  better  to follow  them.  According  to  them the  person  who  fired  the  bullet left  them  that  evening  and  that they  didn’t  know  where  he  went. As  for  them  they  declared  that they  regretted  their  action.  How did  they  do  it  and  why  is  another matter.  In  any  case,  as  they  didn’t have  anywhere  to  hide,  willingly or not, they all give in. The person who fired tried to escape alone but when  he  realized  that  he  reached a  dead  end  he  committed  suicide. The  film  ends  like  this.  When  asked why they did this thing, they claim  that  they  were  misled;  and there  are  names  they  mention.  It is not the time to talk about this at the  moment.  Whether they  were misled by others or not; or why did they  commit  this  mistake?  There are  a  lot  of  things  we  can  raise. The  incident,  anyways,  happened just  like  this.  But  we  cannot  just say ‘it ended like that’. Their units needed to be notified. It is not about delivering statements to the world; first and foremost these people have to explain to their colleagues about what happened, no matter whether they  were  misled  or  not.  So  one of  them  gave  a  statement  on  how they  came  to  this  stage,  and  how they  were  misled  and  committed this mistake. The story was closed there.  Nothing  can  explain  the incident  more  than  what  I  have said here. One can write a fiction out  of  this  but  the  truth  needs  no more explanation than what I have already explained.

-Can this incident be seen within the framework of the different external hostilities perpetrated against Eritrea? Or is it a separate incident?

Our culture dictates that we need to have proofs and facts to claim that.  But this doesn’t mean that we cannot have analysis or give an informed guess. We can try to put all the pieces together and create a picture.  Naturally  in  a  hostility that went on for so long and which is  also  a  common  knowledge,  one can  be  inclined  to  think  that  the incident just might be an extension.

But in our culture and the way we  do things, we need to first and foremost  have  facts  and  proofs  to make any claims. We can’t just make conclusions before we have the facts first. Only then can we claim who was involved, or whether there was external involvement or not. There is no need for haste and we don’t want to engage in rhetorical blunders. If there was any link we will find out in due course. From our  observation  before  we  could put  together  pieces  and  we  might form a picture in retrospect. But we don’t have any reason to engage in such speculation. The hostilities are not new to us. But to say that this incident has a direct link with these hostilities, we should ask “Based on what facts?”  How did we read the situation and what proofs do we have? How did we come to this conclusion? Indeed we have come to  know  much  about  the  situation in  these  past  two  or  three  weeks  but we have yet to be certain about  things.

-What developments are there after the incident?  As Eritreans, stability and security are our Pride.  In what condition are they at the moment?

This is not something we talk about merely to praise ourselves. Societies or peoples are organized in families, communities, and then in nation.  At different historical time they can have different forms of development. In this country we can say there is a security that can be considered to be a guarantee for any eventualities. But how did this country become a nation and a state?  Considering  its  socio-cultural  and  other  criteria  at  what level of the nation building process is  it  found? We  can’t  claim  that  it has  completed  the  nation  building process  even  with  the  experience we  have  passed  through  as  it  is  a dynamic  and  continuous  process. However, the security development and endurance of any given people cannot come from nothing.  When such symptoms surface, how does it fit itself in with the history of the people?  I don’t think it is a new thing.  We  can  look  back  into  the past ten years and we can ask how could  this  small  country  with  its small  number  of  people  withstand all these hostilities? It is a common knowledge and even our enemies know that although they don’t want to admit it.  But this peculiarity is not something to be taken lightly.

What’s more getting in to such a vast topic due to this small incident is giving this incident more weight than it has.  So  it  is  best  that  we treat  the  issue  with  the  equivalent attention  it  deserves.  Why should one be compelled to join a party where there is really no one there?

I  think  we  need  to  understand the  value  of  this  country  and  its traditions.