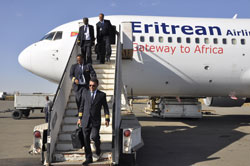 The management of Eritrean Airlines has indicated that it is striving to launch additional flight routes.

Asmara, 22 February 2013 – The management of Eritrean Airlines has indicated that it is striving to launch additional flight routes.

Mr. Teklemariam Tedla, Eritrean Airlines Chief Executive Officer (CEO), disclosed that an agreement has been reached with Sudan Airways to launch flights to and fro Khartoum-Dubai and Khartoum-Juba. He further pointed out that the Airline is exerting stepped up efforts to start additional flights linking Asmara-Dubai, Asmara-Khartoum, Asmara-Jeddah and Asmara-Rome.

The overhaul of Boeing 767-200, the Airline’s asset, is expected to enable it fly to Western Africa countries, according to the CEO.

Capt. Samuel Woldemichael, a pilot, said on his part that a trend of growth has been noted as regards the number of passengers flying with the Airline from Asmara to Khartoum, Cairo and Dubai. “Boeing 767-200 is due to play significant role in ensuring well-timed cargo service too,” he added.