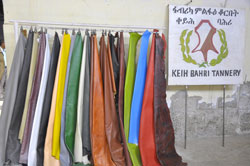 It has been gaining fame for the quality of its products as well as for the achievements it registered so far. It produces quality and internationally competitive products. The appreciable products of high quality make Keyih Bahri Tannery an ever flourishing industrial plant.

Built in 1946, Keyih Bahri Tannery, which was then owned by Italian business man-Signore Baldini, is among the earliest industrial plants. However, it was time that the lot of Keyih Bahri Tannery was not other than be seized by the Derg regime.  The Derge regime seized almost all private owned industrial plants in 1974 and it would have been only a miracle if it was spared.

Keyih Bahri Tannery used to manufacture shoes and produce semi-finished leather for international markets. Notwithstanding this, it was dramatically deteriorated and was hardly functional until independence.  Keyih Bahri Tannery continued to be administered under the Eritrean Government from 1991 to 2000. But, it was privatized early in 2001.

As of 2001, the factory worked hard towards bringing an all-rounded development. Hence, says Mr. Brhane Asfha, owner of the factory, replacing the old and outdated machinery with modern ones and hiring skilled human power was the primary objective in which the factory has made its level best effort.

The result of the efforts exerted to bring a transformation has been seen in the last 12 years. Small-scale local firms that make bags, shoes and belts have now access to quality leather at fair price. If

Keyih Bahri Tannery used to process only cattle pelts, at this time sheep and goat hides are also being processed and has indeed become sources of foreign currency.

Along with the advances it has made, the factory has opened a section that produces plastic sandals of varied type; it also introduced sack manufacturing machines.  Necessary infrastructure that could facilitate such additional task has also been put in place beforehand. “Such advance in introducing new machines has been made through foreign currency obtained from export,” Said Mr. Georgo Abrham, Manager of the factory.

The skill the employees of the factory have been acquiring is indeed very exemplary. The factory has made tremendous progress in terms of upgrading its employee’s know-how in manufacturing industry. Keyih Bahri Tannery has been training its employees through sending them to abroad as well as through hiring experts that could train them locally. Mr. Georgo Abrham said that the factory has offered three training courses of one year in three phases through hiring Chinese experts. Through this the employees not only acquired the necessary skill, but could also learned from the technological advances and work experiences of foreigners.

If keyih Bahri Tannery started its operation as a private industrial plant in 2001 just with 68 employees, this time it has about 250 workers who are fulfilling their duties at different sections of the factory. What is more is that, as the factory is flourishing, hiring around 150 workers in 2013 is among its plan and it has already invited possible candidates through a  notice published in a local newspaper.

Through introducing new machines, in 2013, the factory plans to open a section that manufactures plastic boots. The factory has to go parallel with the ongoing investment interests of nationals form abroad and from inside the country. Hence, it has bu

ilt a section that would soon start to produce cartons so as to satisfy packaging demands.

This all advance would not have been realized had policies of the Government not been encouraging. Owing to such encouraging policy and the factory’s commitment to bring new developments, Keyih Bahri Tannery has become among the country’s thriving industrial plants.