Nakfa: Symbol of resistance and perseverance of the Eritrean people Part V 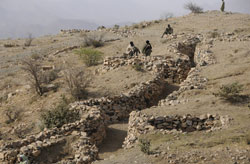 Volleyball as any one knows is a kind of a game where two competing teams are separated with a net in between and play the game inches apart. In the game of Volleyball from the six players there is one a play maker and one smasher. The ball coming from the smasher is very hard to deal with by the opponent and the name given to this particular trench was to indicate the hard part of the situation there during the war for independence. In this trench when the enemy throws hand grenade on the EPLF fighters it was common for the fighters to catch the hand grenade, before it reaches the ground and explodes, and throw it back to the enemy like that of Volleyball ball. What a Volleyball game!

Fernello is also an Italian word meaning a kind of zinc corrugated stove Eritrean women use to boil coffee or sausage. The process is done by putting charcoal on the Fernello and the charcoal burns creating red fire enough to boil the coffee or the sausage. The combatants who have been in that particular trench, Fernello, recite that the trench was being turned into a hell with the continuous heavy artillery and aerial bombardment of the Derge regime and it needed unswerving endurance beyond imagination.

The combatants had to face all the hell on earth with the bombardment and their unflinching determination and will power did not allow the enemy forces to succeed and advance even an inch.