“The Eritrean People Have Never Been Led Astray By Lies and Deception”: President Isaias Afwerki 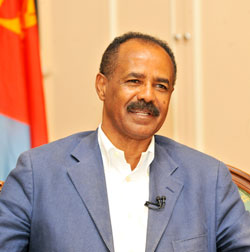 It is to be recalled that President Isaias  conducted  an  interview with  the  local  media outlets  as  regards the ‘21  January  2013  incident.’  Excerpts of the second and final part of the interview follow:

Throughout  history,  there  have been  certain  bankrupt  and socio-culturally  despondent  carpetbaggers  who  attempt  to pull  the  wool  over  others’  eyes.  If such  a  quarter  invites  you  into  an encounter, or else, if he defiantly abases you for the sake of his own reputation, it is always good to be well  rid  of  the  engagement  from  the sought after squabble. Indeed, the notion of vigilance has been a deep-rooted culture in our mass media workings and different political agitation programs.  In other  words,  any  action  against such  provocative  moves,  however  regretful  it  might  later  be,  is tantamount to serving the interests of  bankrupt  parties.  You need to see with composure which way the wind blows. Utmost caution is, nonetheless, imperative towards the disinformation facilities that are put in place everywhere to hype wishful engagements.

It  is  to  be  noted  that  the  Government  of  Eritrea  does  not have  the  habit  of  clearing  the  air  promptly  in  times  of  similar incidents or when bad news against it  is  in  the  grapevine.  Taking the advantage  of  circumspection  for granted,  does disregarding  in itself  not  have  certain  misleading demerits?

In  retrospect,  a  lot  of disinformation  and  psychological warfare  has  been  waged  against Eritrea  over  the  past  well  over ten  years.  It is not unnatural for mankind to have misgivings about the repeated trumped-up stories. Needless  to  say,  there  was  no  one who  was  led  astray  in  the  past month due to the flat lies. In  fact,  I  would  say  that  such frequent  duplicity  has  resulted  in popular  wisdom  and  immunity. With  the  elapse  of  time,  those  temporal  lies  will  only  take the  wind  out  of  the  fabricator’s  sails.  Involvement in daily, hourly or up-to-the-minute news necessitates extra caution. Indeed, the concerns from compatriots inside the country and abroad solely reflect compassion.

With all the facilities of disinformation in place, what is the lesson we could draw from such an incident?

We have witnessed diaspora Eritreans expressing concerns as a manifestation of their empathy and nationalism.  An unusual phenomenon or ploy–be it big or small–or any new trying moment is worth drawing a lesson. However

bizarre the incident might seem in the past two decades, it has not  only  enlightened  the  general public,  but  also  has  culminated  in popular immunity.

Although our statements might appear somehow delayed, it is worth emphasizing at this juncture the fact that we shall never be party to such derailed engagements. As campaigns of new experience crop up, they would only end up in strengthening the inheritances bequeathed thus far.

Participation of Com-patriots, The Key Factor to Economic Growth