Nakfa: Symbol of resistance and perseverance of the Eritrean people Part VI 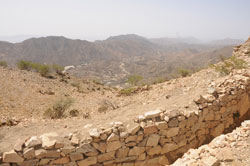 In the part II and III of this article we tried to explain the some of the different names the EPLF combatants gave to trenches during the armed struggle for independence. The names are many and we tried to mention only some to give our readers the clue on how the situation was trying for the combatants and how it needed for them to endure the hardship and look to the bigger mission, Eritrean independence.

Testa is a kind of head to head fight where individuals use their physical heads to hit each other on the head. It is a kind of collusion of two individuals’ heads. With this kind of fight there is physical contact between the two sides. This trench what they called Testa was very close to the enemy position and no one could stand for a second to stretch his/her body. No movement what is so ever. One movement means the end of ones life.

Testa was later replaced with Globe. It was designed in a way that from the trench, unlike the other trenches, one could control the enemy movement from every angle. And the

name Globe was given to it to indicate its round shape formation as that of the earth.

The long trenches circling the enormous and proud Denden Mountain are among the first trenches the EPLF fighters built to hold the advance of the Derge forces during the fourth offensive. All other trenches in the area have their peculiar names upon which they tell their own stories of the struggle for independence.

Some of the trenches, especially Denden and alphabet ‘P’ that I am witness to need a lot of work to maintain them so that they survive for history to posterity. To maintain the trenches there is no need for sending experts to decide upon which material they were built. They were built from the stones and trees found in the area. Hence, with small effort and decision these trenches that have made history in saving the lives of thousands of liberation fighters could survive long and become the source of pride for our past history.