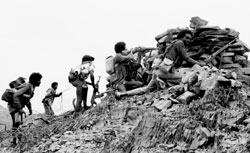 These developments were a threat not only to the Dergue but also to the allies; the Soviet Union, Cuba, South Yemen, and Libya which intensified their intervention. Soviet delivery of weapons was increased and Cuban and South Yemeni armed forces deployed. The Libyans provided logistical and material support and in the middle of July 1978 a large-scale offensive was launched.

Until then the Eritrean revolution was in the stage of the strategic offensive. The fighting capability of the People’s Army and the Peoples Militia was at a high level. But the intervention of the Soviet Union and its collaborators had changed the military balance in the Dergue’s favor. Given these developments, it was obvious that the EPLF could not defend all the land it had liberated and safeguarded all of its other gains.

And faced with historical question that demanded correct answer, the EPLF decided to effect a strategic withdrawal, after assessing the military changes which had taken place. But the strategic withdrawal did not imply the losing of hope. At the time comments to the effect that the Eritrean revolution was no more, were common in the international stage. Inside the country, there were those who claimed that it was impossible to confront the enemy’s offensive and who accused the EPLF of adventurism. But when EPLF decided on the strategic withdrawal, it did not intend to leave all of the liberated areas at once or go to fragment its forces and return to guerilla warfare. Since the liberation struggle is not only a military task but also political, psychological, social, economic and cultural; and since in liberation war the existence of a base area is of fundamental importance not only for a military objectives but also for conducting the all sided revolutionary’s tasks and activities and since establishing a base area outside the boarders in a neighboring  country creates dependency and imposes limitation which have negative impact on the revolution, the EPLF decided to ensure the continued existence of a base area, irrespective of size. According to the EPLF strategy, the retreat did not mean taking a leap back to the base area. In the process of the strategic withdrawal, preserving human resources by avoiding unnecessary sacrifices, conserving weapons, inflicting man-power, material and morale loses on the enemy, and, what is more, increasing your fire-power, maintaining and boosting your morale, protecting institutions from destruction so they could later be used for reconstruction and the inevitable counter-offensive the basic elements. Of course, the implementation of such a strategy was not easy. It was a task that demanded heavy sacrifice, fortitude and perseverance. And thanks, to heroism and steadfastness of the people and the EPLF, the objectives of the strategic withdrawal were achieved. In the course of the withdrawal, the People’s Army upgraded its battle effectiveness, steeled its morale, increased its fire-power, safeguarded its basic institutions roughly delineated its base area, and went on to ensure a secure defense.

The first phase i.e., the strategic withdrawal-incorporated the first offensive which started in mid-July 1978 with the withdrawal from the South and includes the breaching of the Asmara-Embaderho front up to the battle of Makereka at the end of July; the Second Offensive which began on the 20 November, 1978 and continued till the end of the month in the areas to the east and to the south of Keren; the Third Offensive, starting from January 1979 on the Anseba, Maamide and North Eastern Sahel Fronts and from February 6-9, around Denden on the Nakfa Front; as well as the enemy’s futile attempts to breach the various fronts from 30 March up to 11 April 1979 in its fourth Offensive. In the process of withdrawal, the Eritrean Peoples Liberation Army ( EPLA) did not only effect a gradual and orderly retreat to its fortifications in Sahel but also intensified its mobile and guerilla operations behind the enemy lines and won important battles. As the enemy had incurred a combined loss of about 25,000 men in the four offensives and the EPLA’s defense capability had grown in all respects, the Dergue was forced to make better preparations for its next attempt at breaching EPLA defense lines and liquidating the EPLA in a war of encirclement.

Nakfa: Symbol of resistance and perseverance of the Eritrean people Part VI