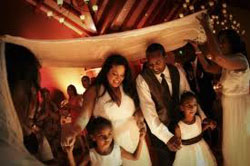 Weddings are a time in your life when you want everything to be perfect. You want to choose time of the year to get married that fills all your needs. Wedding seasons can have an impact on any wedding.

And while this is true for every one around the world in Eritrea the most known wedding season is around January. Although it might be a little sunny and might not suit the traditional weddings, this time is chosen because of its cultural preferences. This fact is supported by both cultural and economical reasons.

In Eritrea the rainy season is in between May and August so farmer’s harvest is mostly between October and late December. For this reason January is the most festive and rich time of the year.

On a cultural aspect these few months are the only free time for any farmer around the country. Once they finish their jobs in December they don’t have to do any demanding duties until the end of March or the firsts of

April.
Weddings are hosted in this time because it’s a rich season and you don’t have to be tight and also because it almost sure that it is a comfortable time for the newly weds family and friends.

Because as we all know for us there is no such thing as a small wedding. Your extended family must be present without any exception.

Nowadays weddings are hosted almost any time of the year. Apart the days that there is fastening. The second busiest wedding season now is summer. Mostly because our family and friends that live or work in other countries tend to come home for their vacations.

So for the last 7 weeks Asmara just as the rest of the country has been over overflowing with weddings, beautiful brides, gorgeous settings and sincere smiles. And we still have

two more weeks before the Easter fasting begins. That means two more Sundays in which people will be really busy in trying to be present at two or maybe three weddings. Two more Saturdays in which there is “Aarki Hilifot”(a traditional ritual on the evening  before the wedding when the groom together with few people on his side go to the brides house, have dinner and party after words). And of course two of each traditional weddings events. Like “zumka”: an event that has to do with the women of the family before the wedding. Most of the time is four of five days before. They help out the mother of the bride (or the groom) to do the preparations. And after a long day, after they finish their work, they get to do their own feast. Other thing as “hilifot” and “teskar” are still as important as they use to be.

In other words the most beautiful thing about these weddings (apart that weddings are always a joyful thing) is the fact that they still have the outmost reflection for our culture and tradition. And it is always nice to have traditional moments in the weekend after a long week.

“I was eager to achieve greatness”