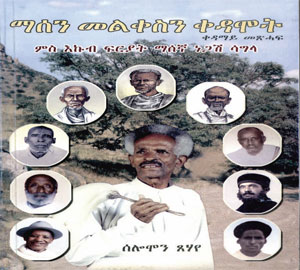 One may have professional skills in certain number of disciplines, but if not in depth, through reading one could have the cream knowledge of any field. In reading one could learn the cultural wealth of any given society. Values, rich cultural and societal philosophies, development of science and arts that are steppingstone towards all-round development could be achieved through the knowledge attained from reading. The benefits of reading is as vast as the collective thinking capability of every individual. Let alone to guess what is being processed in people’s mind, it is impossible to have a deep knowledge of the ideas that continue to be conceived in the mind of an individual.

However, reading gives one the very universal ideas that are commonly shared by people from around the world and also the differences in philosophies of life and livelihood. One may want to learn about societies from around the world but it is impractical to have a firsthand witness of all experiences. Thus, reading plays a leading role in bringing a collective knowledge simultaneously to all readers who wish to read as much as they could. As is not easy to include the benefits of reading in understanding culture and other disciplines altogether, let’s see the first of its kind attempt made to document Eritrea’s Oral tradition with particular emphasis on oral poetry.

I have once read Songs of Lawino an epic poem by Ugandan poet–Okot P’Bitek–which originates from deeply rooted African oral tradition, and I began to think that Eritrea has such a wealth but there has been no written documentation of the oral literature of different forms. It is time now, Solomon Tsehaye’s Massen Melqesn Qeddamot (volume I), which is the first part of the trilogy of such books has brought a gist of Tigrinya Oral Poetry.

Luckily enough Eritrea had a written form of language that existed for two millennium, but most writings of the early times were confined to religious scriptures which are

now found in the form of parchments in monasteries and temples and some traces also in caves and steles. Hence, there was hardly any written documentation of the oral tradition be it in Geez or in Tigrinya-which is now a living language. Thus, masse and melqes have been transmitted in the oral from.

Solomon Tsehaye’s book has made the oral tradition which was only buried in the memory of a few reciters accessible to everyone. The major challenge and success of Solomon Tsehaye lies on the excavation of the hidden treasures of tradition and in making them reachable.

As is mentioned on the back pages of the book, 35 works of distinguished oral poets that comprise around 350 pieces of Masse and Melques have been featured in this first volume.

Melques is most likely equivalent to elegy. Elegy mourns the death of somebody and so does Melques. But, Masse, which is also the popular form of oral poetry is recited in festive events and it honors and praises the achievements of somebody.  However, these two forms of oral poetry are very versatile in nature as well as content wise. Besides mourning or praising, they also ridicule and criticize. So, the power of their multi-dimensionality make them efficient tools that could delight and instruct the society.

Masse and Melques have unique features. These sorts of oral poems are not pre-planned types, but are rather recited while simultaneously being composed. What is really worth mentioning is that the creative ability of the genuine authors of these two forms of poetry. Let’s see some of the excerpts taken from the notes about the book:

Masse and Melques are usually composed while they are recited. Such spontaneity makes Masse and Melques a unique form of oral poetry. Authors of Masse and Melques (called massegnatat in Tigrinya) are oral poets who have developed exceptional skills in thinking fast, which make them sharp and witty. They possess a vast knowledge of history, culture, religion, law, and genealogy and diverse aspect of social and civic affairs. They are an intellectual elite on whose creativity and wisdom society relies. Some of them are thought to have prophetic capabilities, and their sayings are quoted in relation to various social circumstances.

If Masse and Melques have such a power in the transfer of vast knowledge areas but still remain hidden inside the minds of their authors, with the elapse of time it would definitely be a great loss of irrecoverable cultural asset. The extensive researches the author conducted in documenting and recording such priceless pieces of oral tradition indeed deserves appreciation.

The reciters and genuine authors of these two forms of poetry     have inherited the Eritrean society a spice to its day-to-day activity. They have also become great sources of references to early Eritrean history if not in its entirety.  The author has given life to the oral traditions that has been in threat of extinction. As the practice of Masse and Melques has almost been discontinued, its vitality has been fading with the elapse of time. But, the author, through the publication of the book, has shade light and gave breath to Masse and Melques some of which date back to around 1765 by master oral poet Feleskinos.

To meet this challenge, this book is produced in a race against time to research and collect Masse and Melques from the mouths of wise and knowledgeable old people, mostly in their 80s and 90s. A few of the informants are even 100 and above years old.

So, this book could give an insight to anybody who wants to learn some about the oral poetic pieces of Masse and Melques. As “memory naturally diminishes with old age. Worst of all death destroys everything”, what has been collected in this book would definitely preserve the vibrant oral tradition. The study of such cultural heritage could only be shared simultaneously at once thorough reading. The benefits of reading is indeed unparalleled to anything else for everything else emanates from reading and understanding various disciplines written aspect of any given language. The author also plans to publish a book of translations of the master pieces of Tigrinya oral poetry into English.