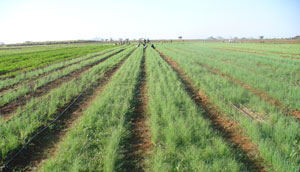 The traditional spate irrigation is a profitable agricultural activity under the following circumstances. a) Farming practices are improved, permanent diversion structures and canals, field bunds or embankments are constructed b) Pests are are controlled on time and c) Fodder for animal feed is produced sufficiently.

Maintenance and repair of the spate irrigation system is quite frequent and laborious, because of which the farmers have little time for other agricultural activities. Weed and pest infestation are common problems.

Land preparation: In the spate irrigated farms, land preparation is carried out for the following objectives: a) To minimize soil moisture loses by evaporation b) To prepare good seed bed and to sow crops c) To control weeds Based on the above objectives, land preparation activities can be classified into two major parts: Pre – Irrigation ploughing (Nekli) and

The soil is ploughed to break the dry and usually compacted soil surface. The purpose of the pre-irrigation ploughing or Nekli is to break the hard and dry soil surface, so that the floodwater will infiltrate the soil quickly before much of it is lost by evaporation or by draining through broken field bunds. After irrigation every deposit of sediments seal the soil surface. Thus, if a field receive very small mount of floodwater and some more irrigation water is expected, the ploughing may be repeated for the second time.

Post – Irrigation ploughing: When a field receives sufficient irrigation water or when no more floodwater is expected, a conservation tillage known locally as “ Mekemet ” is done. Mekemet is practiced after the field receives irrigation water and when the soil surface is just dry enough to allow ploughing. The land is first ploughed to break the crested and compacted soil surface. A cylindrical or flat wooden log, which is pulled by a pair of oxen, is

then run over the whole field. The operator stands on the log as the oxen pull it. By this operation the soil is further broken into smaller pieces and at the same time the loose soil is compacted.

The objective of this operation is to minimize soil moisture by evaporation. First, the dry and lose soil at the surface acts as a cover against the excessive heat of the sun thus reduce evaporation from the soil. Secondly it breaks the capillary movement of the water inside the soil. The loose soil acts as a buffer between the inside part of the soil and the atmosphere. If planting must be done without much delay, this conservation tillage or “Mekemet ” is not done.

Ploughing for sowing and weed control: When crops are sown, normally the land is ploughed in order to soften the soil and prepare a good seed bed. By this operation, weeds are destroyed. After this, no weeding is done manually or by cultivation.