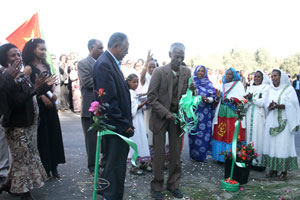 Reports indicated that a painting depicting the history and heroic feat of Eritrean women was unveiled at Tokor River, Central region, in the presence of government officials, Army commanders, community elders and a number of invited guests. Speaking on the occasion, Ms. Almaz Lijam, a member of the event’s Coordinating Committee, noted the need of erecting such memorial paintings in various corners of the country so as to popularize the role of Eritrean women in various domains.

Likewise, the Administrator of the Central region, Mr. Kahsai Gebrehiwet, pointed out that the EPLF had a strong conviction from the outset that the armed struggle for independence would not culminate in victory short of the participation of women. He further indicated that the armed struggle provided the ground for enduring gender equality, and asserted that women nationals could ascertain such social esteem through genuine participation.

Moreover, the Day was commemorated in Mai-Tsebri Administrative area at regional level in the Southern region, while it was marked in Barentu city in Gash-Barka region. The regional Administrations called for stepped up effort on the part of women as regards keeping intact their values and enhancing participation in various programs such as that of combating harmful customary practices.

Furthermore, a call was made for pertinent bodies to sustain integrated effort with the NUEW in connection with the Day. Moreover a number of female students who demonstrated outstanding performance in their academic pursuit received awards, besides those who won in the contests organized in connection with the event.