Nakfa: Symbol of resistance and perseverance of the Eritrean people Part VII 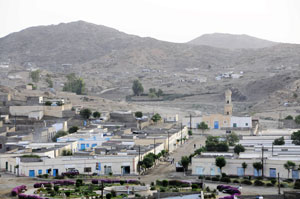 The town of Nakfa that the Derge regime tried to regain with all its capacity, by deploying an army that was supposedly the strongest army in sub-Sahara, stood firm in allegiance with the Eritrean liberation fighters and it never gave up.

To day Nakfa is a city on the growing. Once seemingly deserted for its inhabitants fled the area due to the war and heavy aerial and heavy artillery bombardment by the Derge is now growing in population and service provision institution. The town to date holds the School of Social Sciences, Wina Technical School, modern hotel and other public and private institutions.

The town of Nakfa is the capital city of the Nakfa sub-zone. The population of the sub-zone is more than fifty thousands. In the sub-zone there are six kindergartens, six elementary schools, three boarding schools and one high school. With regards to health services there is one hospital, two health centers and six clinics.

The location of the Nakfa town makes it possess moderate climate suitable for people to live in.

The history of Nakfa, the many different trenches and the climate makes Nakfa a potential for tourism industry.