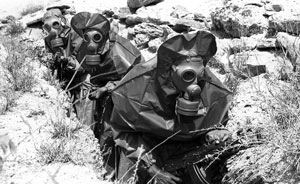 In the second phase, the EPLA aimed at consolidation while the colonial army’s goals were to breach and encircle. After careful preparation and reinforcement of troops, the enemy advanced towards Agrae on 08-07-79 and also mounted simultaneous and continuous attacks on all fronts up to the end of July. However, the offensive was repulsed and the Dergue lost about 12,000 thousand soldiers and an enormous amount of material. In this Fifth Offensive, the enemy also suffered further deterioration in morale. In contrast, the EPLA’s confidence and capability to defend its strong hold was enhanced and its fire power boosted.

The strengthening of fortifications and foiling of successive offensives, however, was not sufficient to bring about the necessary levels of consolidation. For this a defensive attack was required and at the beginning of December 1979, the EPLA launched a major counter-offensive on the Nakfa Front driving the enemy forces to the outskirts of Afabet. It also mounted a supportive attack on the North Eastern Sahel Front which dislodged the enemy from its positions and restricted it to the plains. The failure of its five offensives, and the successful counter attacks launched by the EPLA to ensure the defense of the base paralyzed the Dergue’s offensive capability as evidence by the two years of parity that followed. Aside from their impact on the military capability of the Dergue, these developments had important political repercussions on the national,

regional and international levels. Consequently the Dergue carried out massive mobilization of men and material for a military adventure. The offensive was preceded by a political campaign in Ethiopia, a political and propaganda offensive in Eritrea aimed at demoralizing the people and an international diplomatic campaign. After successive meetings the Dergue issued the “Asmara Manifesto” to give its offensive a semblance of legality and popular backing.

After all these preparations, the Dergue launched the “Red Star” campaign which it as “the one and final” campaign. The plan of the offensive was to wipe out the EPLF in a two to three week war of encirclement. As prelude to

the main attack which commenced on 15-2-1982, the colonial army launched an extensive combined campaign in December 1981 to weaken the EPLA mobile and guerilla units active behind enemy lines. The campaign was frustrated by our forces. The enemy then conducted an intensive aerial bombardment for a whole month. The enemy strategy for the Sixth Offensive was to launch coordinated blitzes on the North East Sahel, Nakfa and Kerkebet (Barka) Fronts. After 18 days of the three prolonged attacks, its armies were expected to rendezvous at Adobha. However, the Dergue’s units deployed on the newly opened Barka Front were crushed with heavily losses and the fronts collapsed in the first few days of the offensive. On the remaining two fronts heavy and bitter fighting which tested the mettle of the two armies continued for 95 days and was finally concluded with defeat of the Dergue’s army at the end of July. In this offensive the Dergue’s casualty amounted to over 40,000. It also incurred immense losses in weapons and other war material. To the EPLF, the 6th offensive was valuable military experience which it surmounted a difficult and trying stage-an important stage which steeled the resolve of the Eritrean people and strengthen the EPLA fighting capability and weapons. It was also a significant political turning point on the international stage.

Nakfa: Symbol of resistance and perseverance of the Eritrean people Part VII