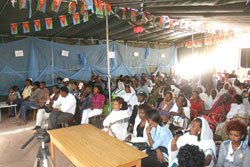 Reports indicated that a number of female prisoners in Hazhaz Prison and Rehabilitation Center, Asmara, are acquiring skills.

Asmara, 11 March 2013 – Reports indicated that a number of female prisoners in Hazhaz Prison and Rehabilitation Center, Asmara, are acquiring skills. The account was made during an entertainment occasion organized at the

Center in connection with International Women’s Day on March 8 in which government officials, parents and invited guests took part.

The prisoners commended the government’s commitment to rehabilitation of prisoners on the basis of raising their production capacity.

Lt. Mehari Werasi, Commander of the Center, explained that it has been organizing a range of training courses and academic classes for prisoners in collaboration with stakeholders. He further disclosed that Matriculation and

General Examinations were given there, creating college entrance opportunities for a number of nationals following the completion of their imprisonment term.

Likewise, Ms. Genet Berhane, head of the NUEYS branch in Edaga-Hamus Administrative area, pointed out that the Union has been collaborating with the Center in endeavors to nurture behavioral change among prisoners and organizing music, drama and sports trainings.

Among the prisoners, Ms. Winta Haile said that she has already acquired skill in tailoring, and expressed satisfaction with the Center’s rehabilitation ventures.