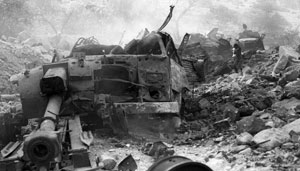 “Nadew in Amharic means “demolition” force and that was the name given to the Derge regime’s army stationed in Nakfa front. The Command was one of the best forces the regime ever had equipped with modern and sophisticated military hardware and was believed by the regime capable to demolish the Eritrean liberation forces once and for all. The Command fortified its tranches in the front for solid ten years without doing any thing to fulfill its mission and finally to be demolished itself at the hands of the Eritrean People’s Liberation Army on March 17, 1988, 25 years back this day.

The Nadew Command was one of the four commands of the Derge regime’s “Second Revolutionary Army”. The names given to them indicated the ambition of the Derge regime beyond its power of combat execution. Other than that of Nadew the other commands were known “Mentir” (Wiping out), “Wikaw” (Hit Hard). Nadew Command was composed of three infantry divisions and accompanying support units, and it had between 20,000 and 22,000 soldiers. This is without mentioning the areal support it had with its modern fighter jets and naval support. Despite its number the morale of the soldiers of that Command was at an all-time low, and none of the divisions “had even half of the numbers that would normally constitute an Ethiopian division – ten to twelve thousand men”.

The Eritrean People’s Liberation Front forces after gaining substantial combat experience with crashing power and foiling the seven offensives of the Derge regime and following defensive strategy for more than ten years, it surprised the world by launching a lightening assault on March 17, 1988, an operation commonly known as Operation Nadew.

The Nadew Command was one of the biggest and strongest commands of the Derge regime deployed to confront and annihilate the EPLF forces from the trenches of Nakfa. This huge army with its sophisticated military hardware was made dis-functional by the Eritrean Liberation Forces in a matter of three days.

From this battle the EPLF captured and armed itself with BM rocket launchers, 13 mm guns and other heavy and light ammunitions and vehicles. Thousands of Ethiopian soldiers including three Soviet military advisors were taken prisoners.

The Nadew operation was unique by any standard of combats in many parts of the world and was defining moments in the history of the Horn of Africa. After the collapse of Nadew it was the end of the stay of the Ethiopian

regimes in Eritrea. From Nadew it was a matter of counting days before the Derge regime is routed out from Eritrea.

Operation Nadew and its success in demolition the enemy’s will of fighting, moral and capacity has been a testimony for excellent planning and execution of the military leaders of the Eritrean People’s Liberation Front and the high moral and determination of the liberation fighters to do the job. The EPLF military leaders have proved that their planning and execution quality had out maneuvered the “best” generals of the Derge regime and their Soviet advisors. The calculated operation at Ad-Shirum where the Derge’s tanks were blocked and destroyed is one of the highly thought and executed combat plans of the EPLF military leaders.

The operation had taken the world by surprise and the major media outlets of the world began to talk about the operation in particular and the struggle for Eritrean independence in general. With this operation the Derge

regime was defeated both militarily and diplomatically for the EPLF became a head line in many media and international forums.

After the devastating defeat of the Derge regime at the hands of the gallant EPLF fighters inAfabet, it could no longer resist the advance of the liberation fighter for total freedom of Eritrea.

The freedom fighters also knew that the much anticipated freedom they anticipated for years is coming to become a reality. And after three years from the annihilation of the biggest and strongest Nadew Command in Afabet Eritrea received its right place in the world as an independent and sovereign country.

In conclusion I would like to commend the Northern Red Sea Region for the excellent organization of the tour to the tourism attraction sites of the region.

Eritrean Secondary Education Certificate Examination to be conducted next week