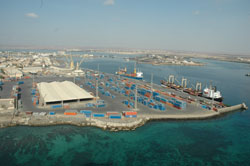 The year 2012 was a good year a lot of friends were in Eritrea visiting family and touring the country. Those who went out to different parts of the country and saw the different development projects were very much impressed in what have been achieved and the future prospect of the country. There are may be a few people who think that Eritrea has not achieved a worth mentioning achievement. However, what I want to remind those souls is that Eritrea’s economic policy is based on social justice and equal distribution of development in all six regions of the country. A development policy that is based on the Golden Principle of Political and Economic independent, self-reliant, as well as free from external support and dependency.

In 1991, faced with a zero economy, no viable economic institutions, no sustainable infrastructure in education, health, socials services and transportation system, the Eritrean Government started building a holistic development program; economic emancipation and prosperous nation. Based on the cardinal principle of Social Justice; meaning that those who have been on the underside of history must see that there is a qualitative difference between repression and freedom. And for an Eritrean, freedom translates into having a supply of clean water, having a viable electricity supply; being able to live in a decent home and having a good job; to be able to send their children to school and have accessible health care.

Eritrea in the first ten years after independence had spent over a billion US dollars on infrastructure, power plant, roads, dams and social services (schools, hospitals, potable water and electrification). The government shifted from centralized to rational development programs through privatization; it developed a liberal macro economic program in 1994 to attract foreign investments. Eritrea’s economic environment is different from most developing countries. Economic development policy of the country is based on investment rather than foreign aid. Eritrea’s political, social values and norms are also much different. Political stability, virtually no corruption, inexpensive skilled and industries labor force are the comparative advantages. Energy, mining, agroindustry, construction, tourism, marine resources offer good opportunity for investment. Understanding these opportunities many foreign firms and capital had started to flow into the country. The country was registering 7 to 10 % growth. In 1998, after the war of aggression, Eritrea’s economic development took a different strategy. Most of the foreign currency reserve was used to defend the country. Foreign investments left the country. Eritrea in 2004 imported $514 million dollars of consumable goods and exported $95million with a trade deficit of $423million dollars. Based on these economic indicators the economic experts in the Western countries forecasted that Eritrea as a country will cease to exist due to the collapse of it economy. As it is the norm of the strong willed people and the leadership, Eritrea today has overcome these challenges and is in a much better position than most of its counterparts. What has been attained to date is a miracle; looking at the major economic sectors i.e. agriculture, infrastructure, health, and education one can testify the accomplishments so far registered.

The Eritrean government has set, sector by sector, strategic development program priorities that require large capital expenditure such as in infrastructure, agro-industry, health, and education. In order to build the infrastructure and other development projects that go along with it, the Government formed national construction companies like Segen, Bidho and many others. Just to highlight a few in the construction sector undertaken by theses companies; the Keren-Tesenei road, Nefasit-Dekahmare, Mendefera-Barantu, Asmara-Zalambesa, Asmara-Mereb, Mendefera-Adekyeh, Keren-Selea, Akordat-Sawa-Girmayka, Massawa-Assab. These infrastructural projects have made it possible for internal handling and transport of goods within a short time interval. In Africa on average it takes 1.5 months to transport goods to ports. In Eritrea it takes much less. In-addition to the roads these companies had built projects worth $1.2 billion estimated cost of construction of residential housing, $350 million dollars cost of hospitals and government offices, $1.5 billion water supply dams.

To promote sustainable development and to achieve food security which relies on the development of Agro-based industries, Agro-Macro policy was devised, Irrigation based agriculture was introduced to increase output and create surplus in cereal corps, vegetables, fruits, and livestock. Dams, micro-dams and water diversion schemes were constructed. Poultry farm, honey farms and animal husbandry are new industries. Food sufficiency has been achieved and export markets are being developed. In order to be competitive and export high value-added agricultural products the Agro-industries has created a post harvest system, sanitary standards and technical requirements in packing and labeling. The Eritrean government has invested large sum of foreign currency to meet the export requirements. Proclamation No. 170/2012, Legal notice No. 121-123/ 2012 has fulfilled the incorporation of Agro- industry and requirements for traceability of export products and marketing.

Realizing the need for skilled labor and education being the fundamental right that all nationals are entitled to, the government built elementary, junior and secondary schools in even the most remote areas assuring access and equity as well as quality and relevance of education with a very high price to gain balanced education system. Seven colleges and one university were constructed to provide higher education. The University Of Eritrea Institute Of Technology which has six thousand (6,000) students is being expanded with four modernly equipped laboratories and four five story high buildings for each discipline.

Eritrea is certified amongst the first African countries for its endeavors on health management system. Skilful management system with well-equipped health care services is one from which Eritrea is best renowned. Health for all is the motto in Eritrea. The health system provides sustainable and excellent health care that is effective, efficient, accessible, acceptable and affordable to all citizens. Access to health care is available in an area of 10 kilometers radius. 75% of the population lives in an area of 5 kilometers from a health center. HIV/AIDS is the lowest in Sub-Sahara Africa. 96% of children receive the necessary vaccination. 95% of the urban and 78% of the rural area now have clean water. Eritrea in the last 15 years have eradicated communicable and non-communicable diseases i.e. Malaria, Polio, Small pox and many others. Has lowered infant mortality rate and is providing good

health services in all corners of the country. Eritrea’s health expectancy stands at 65 years old the highest in Africa.

As stated above Eritrea as a nation has completed the first phase of its economic development program and has now leaped forward to the second phase to attain Social housing, cheaper food prices and prospers life for the population with bright future for the young.

If you think building a few high rise apartments and shopping malls for the very few rich people to enjoy life is what you call economic development while millions of your citizens are deprived of health care, education and clean water then yes Asmara has been neglected and nothing has been achieved. However, one needs to understand that Eritrea is not a country where foreign colonial powers using their local puppets run the country for their selfish gain. Eritrea is a country that is built on shared sacrifices and as such all it citizens benefit equally. The Eritrean people and its leadership are humble, honest, and down to earth and not sick with self gratification. Some of us minimize the achievements that the country has achieved with little resources or don’t really understand the workings of a nation building and economic emancipation. Hence, we come to our own wrong uneducated conclusion. In face of all things Eritrea is unhurriedly marching to economic prosperity.