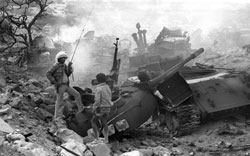 Afabet located on a vast plain is surrounded with mountains which are interlinked with each other and with very few exists and one who has the capacity to block the exits would have the upper hand. That’s what exactly happened during the battle to liquidate the ‘mighty’ Nadew Command and liberate Afabet.  Case in point is the closure of the strategic exits of Adshurum and Kisad-Meshalit by the liberation fighters.

With the position they held (13×13 kilometers stretched trenches), with the military hardware they possess and with the advice they were receiving from the Soviet advisors both militarily and intelligence wise they never expected any one force will penetrate their position and do harm to them. Nadew Command for them was indomitable force that could

undo any attempt by any force and in fact if it happened it was for its final doom. That was Nadew Command to the Derge regime. And it stayed there for 10 years consolidating its power by the day.

What the commanders of the Derge regime and its Soviet advisers didn’t realize was that Eritrea is of its people and the EPLF commanders as sons and daughter of Eritrea know their country from its in and out. They know the location of every mountain, hill and valley. And above all they had people ready to cooperate on what they are asked at any one time and place for they were also part liberation army from behind the front line and in the middle of the enemy forces.

The EPLF military commanders had accumulated the necessary experience during the long years of combat and had well studies the mentality and psychological make up of the enemy. They well know how to create panic on

the part of the regime and take advantage of it. To give some instances before the operation to liquidate the Nadew Command:

52nd Division of the EPLF walked on foot 16 hours behind the front line to reach Kisad-Meshalit unnoticed by the enemy. It went all the way from around Areza, Mai-Dima  (both located in Southern region), Golij (Gash Barka region) through Elaberd, Keren (Anseba region) to Kisad-Meshalit. Division 13 had to walk on foot through Mai-Aini, Dekemhare, Segeneity to reach its destination. The Derge regime was expecting that Division 52 to attach Keren and Division 13 Dekemhare or Segeneity. But that all military maneuvers were to divert the attention of the Derge commanders and create panic on them. The sole purpose for walking all through was to divert the attention of the Derge regime. And sometimes all communications are halted and the enemy become black out on what is happening and where these Divisions are heading for. And that was exactly what happened.

The power of EPLF besides the morale of its combatants was the capacity of its intelligence units. The intelligence units were very much familiar with the terrain and psychological make-up of the enemy. They used to penetrate the enemy line at will and they played a great role in the operation to liquidate the command.

The operation for the demise of the Nadew Command began on March 17 with all fronts. On the second day of the operation a large enemy military hardware was blocked at Adshurm. Adshurum was the only gate way fro the running enemy soldiers and their equipment to reach Afabet. The leading tank on the run was hit at Adshurum and all the rest had no way to escape except wait and see the final demise of it. The enemy understanding that there is no way out with blocked of the only route for escape resorted to destroying its military hardware by aerial bombardment and many fall in the hands of the liberation fighter for later use in the struggle for

At the opposite site Division 52 was stationed at Kisad-Meshalit with two missions. One was to block and kill the reinforcement that could come from Keren area and the other mission to deny exit to the fleeing soldiers from Afabet. And here the fleeing soldiers of the Derge had no way to go through and reach Keren except accepting their due: death or surrender.

The operation for demise of Nadew Command and the liberation of Afabet was a limestone in the history of the struggle for liberation and out-maneuvering the intelligence of the Ethiopian military elites and the Soviet advisors. From that it was only a question of time for the total independence of Eritrea and the coming true the aspiration of the Eritrean people.