One purpose with different intentions 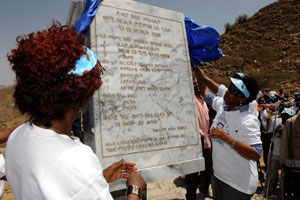 The 25th anniversary of the demise of Nadew Command and the liberation of Afabet was colorfully celebrated on national level from 17 to 19 of March 2013. At the celebrations conducted in Afabet town thousands of Eritreans from the six regions and many from the Diaspora participated. All participants came to the celebrations to commemorate the demise of the enemy and the liberation of Afabet and with that to pay respect to the gallant liberation fighter who made this day a reality and who opened the gate of freedom open with their blood and lives.

Even though the reality was a common purpose many came to Afabet with different intentions. Some, who participated in person in the operation, came with deep memory in their minds. When you hear them talking among each other the topic of discussion was of the places they had to go through to reach the actual combat, the comrades they lost in the battle, the hardship they had to endure, the reaction of the enemy soldiers when taken prisoners of war, and many topics of the day. Their discussion was sometimes emotional, when they remember their fallen comrades, and of joy when they remember the final day of the demise of the enemy command.

Other participants were who happen to be far away from the action only to hear the news through the mass media. They, on their part, were among the Eritrean people from inside the country and abroad who remember the day with great acclamation and with great hope of independence. They too have participated in one way or the other to the demise of the enemy command either through material contribution or being with the combatants in spirit and prayers. And happened to come to the celebrations to physically participate in the occasion they were longing for.

Some were from the local media outlets and others from different cultural troupes who came there to document the ceremony and shrae their findings to Eritreans inside the country and abroad who did not get the chance to be there. The documentations by the members of the local media have been disseminated and still being disseminated by the different sectors of the media and Eritreans wher ever they are are following it with interest. The cultural troupes did also their part in entertaining the participants and in many cases revive the memory of the battle, the heroic feats of the combatants and the unforgettable memory the victory of on Nadew left behind for posterity.

There were also young people and children who came with their parents and enjoy the occasion. It is undeniable fact that these youths will go back home with a very memorable experience and on their part tell their peers on what they have seen and heard. And through them many Eritrean youths will have the history.

Like wise there were also other people responsible for organizing the ceremony and hosting pilgrims to the celebrations. These people from the different administrations of Afabet sub-zone and people from different administrative areas were busy overseeing that the celebrations go through as planned and their guests well accommodated. The security personnel, police forces and members of EDF were also there to oversee the security and well being of the visitors so that the celebrations go smoothly. These were also part of the pilgrims who come to celebrate the occasion.

The part that took all my attention and sympathy was that there were parents who came to the celebrations to pay tribute to their sons and daughter we paid their live for the demise of Nadew Command and liberation of Afabet. One of those whom I met personally was Mrs. Kebedesh Abadi. She is around 80 years old who came all the way from Massawa to pay tribute to her son Atsbeha Alemayo (Sherifo) who was martyred at Meshalit 25 years back to block enemy reinforcement that could come from Keren and kill the enemy soldiers fleeing from Afabet and capture its property. She came there with her daughter in law Combatant Mibrak Abraham (wife of Sherifo). When we see her among members of the then Diveision 52 we came to Meshalit to participate in the inagurationof the statue they build in memory of their fallen comrades on that combat we immediately guessed that she came there with different intention for she was older than the other participants who participated in the combat at Kisad-Meshalit 25 years back. And we proved that our guess was right when we asked Mibrak on the purpose of her coming there that she told us her story. When we consulted her about her coming she told us that she came to pay respect to her son who gave his life to his country on this place and that she is proud of him. Mrs. Kebedesh is a mother of three martyrs. There were many who came for the same purpose and same intention as that of Mrs. Kebedesh.

Be it with different intention the pilgrims came to Afabet with same purpose. To sum it up the pilgrimage was Eritrean and to pay respect for the Eritrean youths who paid their dear life for the people of Eritrea so that they live in peace and harmony for eternity.