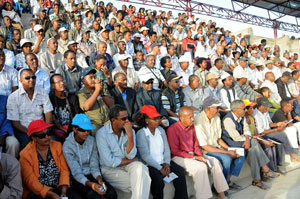 The day which attested EPLF’s utter superiority over the enemy forces and which brought the demise of Nadew Command and thereby the liberation of Afabet on 19th March 1988, has been commemorated with a patriotic zeal. The inhabitants of Afabet have started the commemoration of this historic day three days ahead of the official commemorative event. The inhabitants have staged various cultural shows in which people from all walks of life have enthusiastically participated. A great number of people including guests from different parts of the country and from abroad flocked to Afabet to be part of the silver juvenile of Nadow Command’s demise.  All the shows staged for consecutive days are indeed reflections of the unmatched respect the people of Eritrea give to such a historic day—which was a turning point towards the full liberation of the country.

The official commemorative event begun in the morning hours of 17th March 2013 in the presence of President Isaias Afwerki,  Government officials, army commanders and thousands of people who make pilgrimage to Afabet.
In an opening speech, Mr. Sraj Haji, chairperson of holidays coordinating committee in the Northern Red Sea region, said that the demise of Nadow Command is the outcome of the

steadfastness gained during the course of bitter battles and the overall ten-year standoff subsequent to EPLF’s strategic withdrawal.

Following the opening speech a drama titled “Mrbrab”-roughly translated as “Standoff” was staged. This drama was enhanced through music, choreographic presentation, narration, and other beautifying effects. What this dram tries to reflect is the three phases of the battles held following the strategic withdrawal. It highlights the diehard war held for about 10 years in the trenches of Nakfa, and the final war that destroyed Nadew Command which was the toughest of Derg regime’s military command. The way the drama was presented, that is, the sound and smoke of bombardment, the military tactics and other activities that reflect the daily livelihood of freedom fighters makes it seem a real battle field.

All the songs which accompanied the drama make one recall the fierce battles and the achievements won through the matchless martyrdom. Next to Mrbrab, Isakana Temrina in Hidareb and Wekey Hrum in Tigre languages were presented. Isakana Temrina highlights the demise of Nadew and distributes good news of success. Whereas, Wekey Hrum is about a soldier who was forced to surrender for he missed the direction towards his army members and who was in search of food and a shelter to hide himself from the eyes of the EPLF fighters.  Following a good hospitality, the mothers who surrendered the enemy solider tied his arms tightly and at gun point they make him follow their orders and thus transferred him to the EPLF. This drama highlights the heroic deeds of Eritrean mothers and its comic elements makes the audience burst into laughter.

A song by Abrhet Ankere provoked former freedom fighters who fought in the battle which brought the demise of Nadow to join the dance ground. Likewise, Hobay Sema, a song by Zeyneb Beshir also made the audience flock to the dance ground.

During the occasion, Ms. Tsgereda Wldeghergish, Administrator of Northern Red Sea region, said that such commemorative event is a driving force that enables one to shoulder the responsibility of exploiting the untold and astounding history of the struggle for independence, and an occasion that remind us renew our pledge to live up to the trust of the fallen heroes and compensate the noble cause they pass for in a redoubled manner.

Also present at the occasion, President Isaias Afworki gave a speech with regards the benefits of such commemorative event in the transfer of values to the young generation and as a reminder event to those who

participated in the heroic deeds in person. The President said an eternal glory be to the heroes who made the demise of Nadew Command a reality. He also commended the holidays coordinating committee as well as all artists who presented well-organized, narrative and powerful shows that depict all phases all the way to the demise of Nadew.

Almost at the closing of the commemorative event, an enthralling calisthenics show was staged by about 500 students. During the course of the show one could see some heavy artilleries of the enemy being sized by freedom fighters. That was not all; the artistic show also highlighted the development programs that have been carried out since the wake of independence in an attention grabbing manner. The event was then closed with the delivery of a sword and a camel to President Isaias Afwerki by the inhabitants and the administration of Afabet.

The emergence of the EPLF as a political power promoted the geo-political interest of the Eritrean people: Mr. Alamin Mohammed Seid