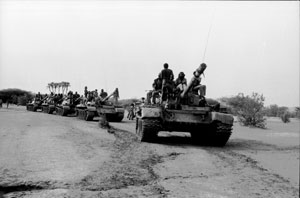 The heavy political losses it suffered in the 6th offensive pushed the Dergue to the other suicidal and desperate measures. Mistaking its fantasies for objective reality, the Dergue concluded that the EPLF’s manpower had been weakened and its defense capability debilitated by the 6th offensive. It was therefore necessary, the Dergue thought, to attack the EPLF before it got a breathing space and the chance to reinforce. Fooled by the assessments, the Dergue adopted a strategy of attrition to weaken the EPLA in an extended engagement and achieve the objective of the failed 6th offensive.

In marked contrast to the “Red Star Campaign”, the Dergue launched the Seventh Offensive (The “Stealth” offensive”) at the end of March 1983. This offensive differed from the previous “Red Star” campaign not only its lack of an accompanying fanfare, but its tactics of feinting and stealth, of mounting a concentrated attack in one place and then changing the thrust to another, had nothing in common with the “6th offensive” strategy of attacking on all fronts simultaneously and for a short period. It continued for a record five month until the EPLA seized the initiative and carried out a counter offensive from 6 July up to the middle of August 1983. The Dergue’s army suffered a total loss of 25,000 troops in the offensive.

The next stage was characterized by the EPLA’s extensive counter offensive. At the beginning of 1984, on the 15th and 16th of January, the Dergue forces in Tessenai and Alighider were attacked and the two towns came under EPLA control. Although a subsequent attack mounted by the EPLA on 22-2-84 against the regime’s forces that had entrenched themselves for five years on the North East Sahel Front “Wukaw Command” to the

enemy did not succeed, the enemy front was liquidated and an extensive area liberated in a second onslaught from 19-21 March 1984. A successful Commando operation was also carried out on Asmara airport on May 21, 1984.

This extensive counter offensive was continuation and intensification of the mobile and guerilla operations conducted behind enemy lines. As the successful execution of major operations particularly in Western Eritrea led to the

contracting of both the areas under the enemy and its defense perimeter, the EPLF decided to mount an attack on Barentu. The operation started on July and the regimes forces were decimated. Operation Barentu inflicted heavy military loses in the colonial army and had major political repercussion which made the Dergue hysterical. To regain the towns, the Dergue mounted continuous counter attacks, and when these proven ineffective, it deployed many additional brigades and brought its biggest mechanized division from the Ogadeh. It subsequently recaptured Barentu on 24, August, 1985 and advanced towards Tessenei retaking the town on 26 August. Although operation Barentu inflicted heavy manpower and material losses on the enemy, boosted the EPLA’s firepower and was successful in pre-empting an imminent enemy offensive it did not lead to the strategic consolidation of the EPLA’s position.

After barentu, the Dergue reinforced its army in Eritrea by bringing 20,000 conscript of the second round of “National Military Service”. Assuming as usual, that the EPLA had been drastically weakened in the battle of Barentu and the regime’s “Red Sea” counter-offensive to retake the town and hoping that its return to Barentu and Tessenei has raised the morale of its army the Dergue started a new large-scale offensive calling it “Bahre Negash” on 10-10-85. This offensive, once again touted as “a once and for all” campaign was as usual expect to liquidate the EPLA in a week. In the event, the offensive got bogged down in its first phase, but the Dergue which had already had confidence, launched two more phases, until the EPLA counter attack on 4-12-85 brought the adventure to halt. In this offensive, which turned out to be complete fiasco, the enemy lost a total of 7,000 men.
‘

The emergence of the EPLF as a political power promoted the geo-political interest of the Eritrean people: Mr. Alamin Mohammed Seid

One purpose with different intentions