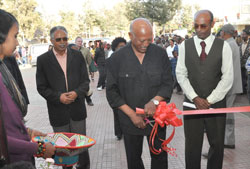 The 12th Eritrean Book Fair opened yesterday at the Expo Grounds here in the capital. The Fair was opened by the Minister of Education, Mr. Semere Russom.

Asmara 23 March 2013-The 12th Eritrean Book Fair opened yesterday at the Expo Grounds here in the capital. The Fair was opened by the Minister of Education, Mr. Semere Russom.

The Coordinator of the event Mr. Yishak Yosef, gave an opening speech, during which he explained that this year’s well-organized presentation attests to the fact that the last 11years of hard work have paid off.

This year’s Book Fair, which would stay open until April 31 includes different books that would serve young students enrolled in higher intuitions of learning. Moreover, “Book talk” with Junior and High school students, lectures on digital library and competitions among students are some of the programs that would feature on the occasion.

Among those present at the opening ceremony, Mr. Tedros Abraha, a teacher, said that there are numerous books at the Fair that would be of special interest to students. He further indicated that the program would play significant role in the teaching-learning process, and that parents should encourage students to visit the Fair.

“This program also inspires writers,” noted Mr. Habtom Brhane, and that member of the public at large stand to benefit from the event.

Books available at the Fair are being sold at 20% price off.