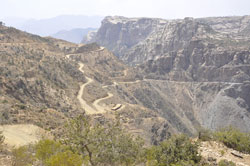 Over 100 Eritrean youth visitors from the Republic of Sudan expressed satisfaction with the ongoing national development programs in the homeland.

Asmara, 27 March 2013: Over 100 Eritrean youth visitors from the Republic of Sudan expressed satisfaction with the ongoing national development programs in the homeland. They further explained to enhance their contribution for the same cause. They made the pledge during a tour they conducted in various part of the country.

The youths witnessed the implemented and envisaged development and infrastructural programs being undertaken in the Northern Red Sea region. They further indicated that the role of youths in reinforcing the socio-economic development programs in the country in general and in the region in particular could not be viewed lightly. They youth also stated to promote successful implementation of the development programs.

In a meeting she conducted with the youths, the Administrator of the Northern Red Sea region, Ms. Tsegereda Woldegiorgis, pointed out that relentless efforts have been made towards ensuring satisfactory social services in the region, including, potable water supply, health care, education, infrastructure as well as communication and others. She further called on the youths to augment their contribution to the national development drive.

Likewise, they youths conducted a similar tour in the Southern region and said that the achievements so far scored are beyond their expectations.

They also expressed admiration for the active role of EDF members in the construction of the road along Egla-Foro route.

The Administrator of the Southern region, Mr. Efrem Gebrekrstos, gave briefings on the development achievements registered in the region and called for extending a helping hand in the undertaking.

Meanwhile, in a meeting he conducted with the youths, the Administrator of the Central region, Mr. Kahsai Gebrehiwet pointed out that it is significant to observe the accomplishments registered in the Homeland through creating a conducive atmosphere towards augmenting contribution for the cause, and that this cherished culture should be well preserved for generations to come.

Meanwhile, the youths stressed the need to work hard in promoting the tourism sector.