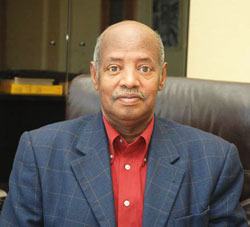 Mr. Alamin Mohammed-Sied, Secretary of PFDJ, conducted an interview with the local media outlets on the occasion of the Silver Jubilee of the demise of Nadew Command and the liberation of Afabet town. Excerpts of the 3rd of the interview follows.

Politically, there were also changes associated with the defeat of the Derge regime in Afabet. The Derge regime called for peace talks, and many countries also started to be interested in our struggle and accordingly there were also new forms of interference on the part of some countries. To this effect, what were the political gains associated with the defeat of the Derge at Afabet (the Nadew Command)?

In the course of liberating Afabet or controlling the Nakfa front, the Nadew Command, one of the special military commands of the Derg, was almost entirely destroyed within 48 hours. This was a miracle performed by the Eritrean liberation fighters! After the strategic withdrawal, that is, after ten years of bitter struggle the Nadew Command was totally destroyed. Those bitter battles experienced by the freedom fighters and the people at large really showed the steadfastness and the strong commitment of the Eritrean people to ultimately make Eritrea an independent state. By the standards of military strategy, it was not thinkable to entirely control and destroy within 48 hours a front that covered 165 kilometers.

It really takes a long, long time to examine and recount how this was realized. To this degree, what is being narrated is just a fraction of what happened then. It was just a miracle. So what was its outcome? The fact that the Nadew Command was completely destroyed was a heavy blow to the Derge regime. It was for the first time in the Horn of Africa that three military officers of the Soviet Union were captured in this battle. What made that very special was the fact that it was done by a mass liberation movement. Such a situation has never happened in history, elsewhere in the world. The Soviets were not captured in Somalia, Yemen or Afghanistan. But this just happened in Eritrea!

As a result, much was talked about the success associated with the defeat of the Derge regime in Afabet. Basil Davidson, a great English historian, for example said,” After 1954, it is for the first time in history that we are witnessing a mass liberation movement to cause such considerable losses on such a large colonial army.” This is an important testimony and one can easily imagine the political gains resulting from such a successful achievement. Right after that front was destroyed, many who were previously against the EPLF started to be on its side and to voice their support for the EPLF. And many, including Gorbachev-who was Soviet Union’s leader at that time started to say that the Eritrean case should be resolved through peaceful means. There were also two sessions held with Erich Honecker in Germany towards this purpose. He placed more emphasis on the need for a peaceful mechanism for resolving the conflict. This indicated that what was previously asserted, by saying that the case of Eritrea is an internal affair of Ethiopia that had to be addressed internally, was changed. But the EPLF was not disrupted by such futile initiatives. It launched the Fenkil Operation attack. That operation surprised many.

Like what Davidson asserted the Nadew operation was the first of its kind, after 1954 when the Vietnamese defeated the French at Dien Bien Phu, in which a liberation movement was able to defeat a government that had a considerably large army. The fact that the Eritreans defeated the Ethiopians in that manner was a colorful achievement. The Derge regime along with its army was the most feared regime in our region (Yemen, Somalia and Sudan). When Eritreans patriotically defeated the regime at Afabet, they felt relieved. The fear associated with Ethiopia and its regime started to get eroded. In my view, the achievements linked with the Nadew operation motivated the Ethiopian Opposition groups of that time – the TPLF, the Oromo and others-to play a role in weakening the Derge regime by launching an attack within Ethiopia against the regime in a concerted manner with what had to be done by the Eritreans.

Thinking that there were further sacrifices paid in the course of ultimately making Eritrea an independent state, why was the EPLF not able to make use of the calls for peace talks following the demise of the Nadew Command? There are some who feel that this would have been helpful for avoiding the sacrifices that were paid in the following three years (1988-1991)?

The EPLF entirely liberated Eritrea in 1991. At that time, the EPLF could have declared the independence of Eritrea. But the EPLF realized that it was not a feasible option to do so and the need to conduct referendum was considered to be a more sensible option. Why? It was sensibly necessary to show that the independence of Eritrea was not an issue of concern for the EPLF only; it was also the burning desire of the people of Eritrea to make Eritrea independent. This is a just legal process. And that was why we waited for two years before the official recognition of Eritrea as an independent state. However, it was quite possible, as it is common elsewhere, to immediately declare impendence. In my perspective, if referendum were not conducted, some would say this type of independence was desired by the EPLF, but not by the people of Eritrea. In that case, it would be argued that the Eritrean people were not consulted. This would enable some actors to conspire with America and others to undo or at least to undermine the independence of Eritrea. In this case, the EPLF was proactively farsighted more than any other actor. And we have seen the result of referendum. More importantly, it was appropriately judged to be a sensible process at it was witnessed by the Ethiopians themselves and by the international community at large. They all witnessed the heartfelt desire of the Eritrean people. This was all the result of a job well done by the EPLF.

Mr. Alamin at the time the Nadew Command was destroyed, you were head of the Department of National Guidance So in terms of news coverage, do you feel that the Nadew operation was comprehensively communicated? How was this issue handled at that time? Does the demise of the Nadew Command convey an important message or signal to the world? How effectively was it shared locally and internationally?

If we had half of the technology we have now, it would have been really helpful for covering the issue extensively and for sharing it widely. However, I feel that despite our meager resources, we were able to reasonably and widely communicate it. More attention was paid to it everywhere in the world. In side Eritrea, there were Dimtsi Hafash (The Voice of the Masses) – radio-and some magazines that used to communicate the good news and the achievements associated with it. Internationally, I believe those parts of the struggle with civil uniforms, journalists, who were the supporters of the struggle for independence in Eritrea, as well as solidarity communities that supported us were all helpful for covering the issue reasonably and extensively.

It has been 25 years since Afabet was liberated and the Nadew Command was liquidated, and it has been 22 years since Eritrea finally became an independent state. Therefore, how do we assess, through retrospective and proactive, the effectiveness of the EPLF in discharging the responsibilities it started to shoulder many years ago? What are the most important issues of concern that can be raised at this stage of our history?

There are a number of issues to be raised. It would be better to discuss such issues at some time in the future. While there are many concerns that we have to talk about, for this time it would be good to limit our discussions to the Nadew operation. I feel it is important to arrange a separate session for discussing our current concerns.

We were able to get where we are now simply because, the EPLF was able to strengthen itself and the Eritrean masses. Even now for Eritrea to be much stronger and to considerably push forward our achievements the front should further strengthen its capability, and its perspectives; it needs to be much stronger. What we should do and how we do what we have to do can be open to discussion. The fundamental issue is that the EPLF was so important in the past, and it remains to be equally important now. On my part, I do not tend to feel that there is an option to it. All the gains –political, military and any other gains – will be maintained only if the EPLF is strengthened further.

Vigorous efforts being made to nurture valuable youths in Haikota subzone