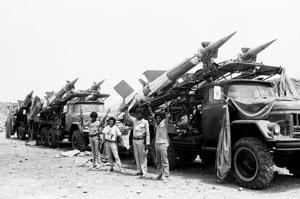 In 1986 although the enemy did not undertake any large-scale offensives, it established many outposts and launched small scale campaigns to protect its rear  as the EPLF strategy of extensive counter offensive initiated in 1984 and intensified in 1985 had created a serious threat to it. On its part the EPLF had been vigorously pushing and expanding it guerilla and commando operations by penetrating and operating in the cities and extensive rural areas, as well as areas immediately behind the enemy’s front lines.

What emerged from the military developments briefly discussed here is that the Dergue’s objectives of consolidating its power, of creating and expanding an empire by liquidating by force of arms and a huge army the Eritrean revolution and the movements of the people of Ethiopia have failed. Initially, the Dergue registered military victories because it was able to exploit the prevailing chaos and channel the chauvinistic sentiments it aroused against the Somali attacks, and as a result of the acquisition of Soviet weapons and military advisors and the physical

intervention of the Cuban and South Yemeni armies. But there after the Dergue’s power and fortunes have been waning. Moreover, as the political bankruptcy of the regime became more evident, the political consciousness and the organized opposition of the Ethiopian people were growing. The failure of the program of national conscription to achieve its numerical targets and successively decreasing number of conscripts from the first to the latest fourth round was a manifestation of the deterioration in the regimes position.

The Dergue’s superiority in new weapons played a potent role initially. But not for long. The EPLA narrowed the gap by capturing and achieving proficiency in their use. The Soviet Union, as well as Cuba and South Yemen, who in the beginning has fielded troops, discovered the impracticality of their plan to finish off the war in a matter of months and then congratulate themselves for having “liquidated a counterrevolution”. They, there fore, withdrew or reduced their forces in Eritrea and kept low profile. The absence or reduction of

their forces which had supplemented the military capability of the colonial army and filled the gaps in its resources and competence further weakened the regime. The continuous deterioration in the army’s morale and the existence of a persistent sometimes open at other times latent opposition within the army was another deliberating factor. The spectacle provided by ex-official of the regime who used to plan and applaud its actions and who pronounced in their speeches that “The Eritrean revolution can not be defeated military” was an indication of the general state of affairs.