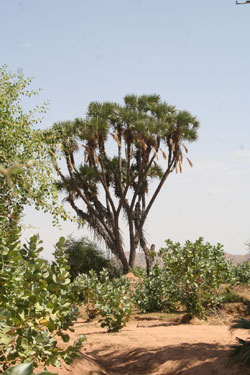 Whenever Zoba Gash Barka is mentioned what come in mind are the Palm Trees (with their fruits and household products) and Elephants. They are synonyms of the region. The popular song by veteran artist Bereket Mengisteab “Akurdet Teseney Meriet Arkobkobay …” (Akurdet Teseney land of palm trees) is one of the renowned songs depicting the beauty and the rich resources of the region.

Elephants that are endemic to the region, as regards Eritrea, are also one of the wanders of the region making Zoba Gash Barka potential for growing tourism industry in the country. The name of the region is derived from the two big rivers, Gash and Barka. These rivers are very important rivers that are playing a great role in the agricultural development of the region. Big mechanized farms like Afhimbol, Adi Umer, Aligidir, Molover, and other private large and small farms largely depend from these two rivers. And palm trees are found alongside the rivers.

As it is easy to find palm trees throughout the Gash Barka region, to the contrary, it is very hard and difficult to find Elephants at will. One has to sweat and walk a long distance to find Elephants, in fact if lucky. Two hours drive by a Land Cruiser and half hour walk by foot and several hours waiting for the Elephants to appear is what makes them dear and valued. There need a chance to be able

to find Elephants and enjoy to see them first hand after driving and walking that much and waiting so much and become lucky that the Elephants appear to drink water. Mission accomplished! There is the possibility that one comes back tiered without finding any clue of their where about. Those who tried and were not lucky know it how bitter and disappointing that is. Any way, that is the interesting part of it and that is what makes it adventurous. One does not easily find Elephants as that of Palm Trees. The difference is that Palm Trees are static and Elephants are always in motion. And so, one does not get the chance of meeting the Elephants at random; he/she has to select date and time and has to wait for hours. They are not cheap commodities that we find them in the market.

Eritrea consists of nine nationalities. Tigre, Tigrigna, Saho, Afar, Kunama, Nara, Bilin, Hidarb, and Rashaida. Out of these nine nationalities seven of them are found in Zoba Gash Barka. For this the region is very rich in cultural diversity, customs and traditions. Almost every thing that is found in the country is there in the region. A visitor who happens to visit the region could claim that he knows every thing of Eritrea in terms of its languages, culture, tradition and way of living of the citizens. Isn’t it unique and interesting? And that is the second point that makes Zoba Gash Barka a hub for tourism.

Zoba Gash Barka consists of large plain land and rocky mountains. The plain land is so fertile that many call the region as the bread basket of Eritrea. From cereals to all kinds of fruits and vegetables are grown in the region. The heavy investment made by the government for building the strategic dams of Gerset, the two Fancos, and other macro and micro dams, and the vast land that is already in place for cultivating variety of cereals, vegetables and fruits is a vivid demonstration for the prospect for realization the county’s food security within the maxim of self-reliance. The mountains themselves are endowed with beauty in their own right and have the potential for tourism attraction especially for those who like hiking and climbing with different categories.

Moreover, Gash Barka has also the prospect of becoming the center of industry of the country. Agaro-industries like that of Gereset, the two Fancos, Aligidir, Adi Umer, Molover, and the private agro-industries; animal husbandry, milk processing plant, BANATOM factory at Alebu are some from the many industrial complexes in the region. What is more, the region is also rich in natural resources including minerals like gold, copper and zinc.