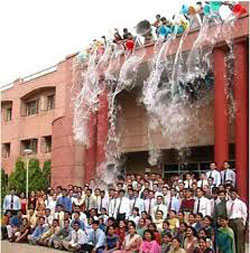 April Fools’ Day, sometimes called All Fools’ Day, is one of the most light-hearted days of the year. Its origins are uncertain. Some see it as a celebration related to the turn of the seasons, while others believe it stems from the adoption of a new calendar.

In fact ancient cultures, including those of the Romans and Hindus, celebrate New Year’s Day on or around April 1. It closely follows the vernal equinox (which is in the last days of March). In the Middle Ages, up until the late 18th century, New Year’s Day was celebrated on March 25 (Feast of the Annunciation) in most European towns. In some areas of France, New Year’s was a week-long holiday ending on April 1.

A study in the 1950s, by folklorists Lona and Peter Opie, found that in the UK and those countries whose traditions derived from there, the joking ceased at midday.

In 1582, Pope Gregory XIII ordered a new calendar (the Gregorian calendar) to replace the old Julian calendar. The new calendar called for New Year’s Day to be celebrated January 1. That year, France adopted the reformed calendar and shifted New Year’s Day to January 1; legend has it that many people either refused to accept the new date, or did not learn about it, and continued to celebrate New Year’s Day on April 1. Other people began to make fun of these traditionalists, sending them on “fool’s errands” or trying to trick them into believing something false. Eventually, the practice spread throughout Europe and later on throughout the whole world.

There is of course the mythical explanation of the origins of April Fools’ Day which was provided by Joseph Boskin, a professor of history at Boston University. He explained that the practice began during the reign of Constantine, when a group of court jesters and fools told the Roman emperor that they could do a better job of running the empire. Constantine, amused, allowed a jester named Kugel to be king for one day. Kugel passed an edict calling for absurdity on that day, and the custom became an annual event.

Prof. Boskin explained that the men playing the role were not fool men at all there were wise ones. It was their role to put things (real political and social events) in perspective with humor.

April Fools’ Day is observed throughout the Western world. Practices include sending someone on a “fool’s errand,” looking for things that don’t exist; playing pranks; and trying to get people to believe ridiculous things.

In Italy, France and Belgium, children and adults traditionally tack paper fishes on each other’s back as a trick and shout “April fish!” in their local languages (pesce d’aprile!, poisson d’avril! and aprilvis! in Italian, French and

In other of the world there are many prank days like: Iranians play jokes on each other on the 13th day of the Persian new year (Nowruz) (now means new and ruz means day), which falls on April 1 or April 2. This day, celebrated as far back as 536 BC, is called Sizdah Bedar and is the oldest prank-tradition in the world still alive today; this fact has led many to believe that April Fools’ Day has its origins in this tradition.

The April 1 tradition in France, and French-speaking Canada includes poisson d’avril (literally “April’s fish”), attempting to attach a paper fish to the victim’s back without being noticed. This is also widespread in other nations, such as Italy, where the term Pesce d’aprile (literally “April’s fish”) is also used to refer to any jokes done during the day. This custom also exists in certain areas of Belgium, including the province of Antwerp. The Flemish tradition is for children to lock out their parents or teachers, only letting them in if they promise to bring treats the same evening or the next day.

Since this festive day is anxiously awaited every year it is funny how kids are already looking forward to play pranks for next year. And they are still laughing about the things they did four days ago.