TTI in the Pursuit of Nurturing Well Trained Teacher 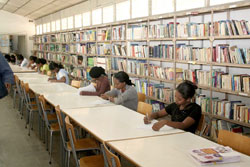 Asmara Teachers Training Institution, the history of which traces back to the British colonial era, used to be the only training center for primary level teachers. This institution has a history of about 70 years which goes back to 1943. Since then, the institution has been providing training courses to a number of candidate teachers. Being a teacher was then a prestigious position. There were certain criteria for trainees’ selection, but such determining quality selection was totally messed up during the Derge regime times, that is, with the coming of less trained and incompetent teachers from Ethiopia. This Teachers Training Institution has now been upgraded to a college level with the construction of additional building complex.

Starting form the wake of independence the need for expansion of educational instruction was as its peak. Hence, a number of schools were built throughout the country. The Institution was then engaged in relentless efforts to meet the ever growing demand of teachers. It was reasonable that the need for fast distribution of schools outweighs the quality of education.  The primary goal of realizing access to education has now been achieved and the provision of quality education is being also realized simultaneously.

According to Mr. Alem Ghebrekal, Director of the Teachers Training Institution, as of 1994 the Institution has nurtured about 9,000 teachers and all of whom took a one-year

course at a certificate level. The Teachers Training Institution (TTI) offers two separate courses in Arabic and English languages. So, candidate teachers can take courses in either of the languages. What is new in this academic year is that, the TTI would start to train teachers at a diploma level. So, trainees who would join the TTI from now onwards would take a two-year long training courses.

The expansion of the training course from one -to- two years of time would impact the quality of education in a great deal. This is in fact due to the competence the trainees would acquire in their two years stay at the college as opposed to the former range of one-year training time. The principal tenet of the country’s education policy says every primary school teacher needs to be a diploma holder; however, this has not been translated into action due to the huge gap between the growing number of students and meager number of teachers.

Notwithstanding the deficits which had negative impacts, the new development would not only improve the quality of education but would also encourage teachers for they would start to think of being promoted to a higher level of academic status. So, the inception of a training course at a diploma level would become a double success in the education sector. Such a development would address challenges at grassroots level and before it is too late. This by itself is not an end for outstanding trainees who completed the diploma course in flaying colors would have a chance to join degrees level courses.

All trainees who would join this teachers training college need to meet the standards set by the Board for Institutions of Higher Education. During their stay in the College, all candidate teachers are made to acquire the fundamental principles of teaching methodologies which are the very criteria for the success of basic education that covers from grade one through eight.

The college would continue to train teacher at certificate level simultaneously with the newly introduced diploma course and difference would only be in the selection of trainees. The selection process for diploma level trainees would be conducted based on the set standards by the Board for Institutions of Higher Education and this college would continue to have a say in the selection of certificate level trainees. Taking the new improvement into consideration, it is evident that the future of education sector is very promising.