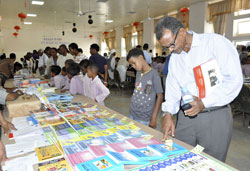 Book Fair has been conducted in all the Administrative regions from the 5th to the 7th this month.

Asmara, 8 April 2013 – Book Fair has been conducted in all the Administrative regions from the 5th to the 7th this month.

The 3-day event involved general knowledge and oratory contests, as well as seminars and artistic performances, besides programs entailing exchange of experience to this end.

Speaking at the Book Fair held in the port city of Massawa, the regional Administrator of the Northern Red Sea region, Ms. Tsigereda Woldegiorgis, pointed out that the event has been witnessing growth in scope, and made note of the significance of reading in the daily life of people. Furthermore, she said that the citizenry in general and teachers as well as parents in particular should demonstrate higher participation in popularizing the norm of readership.

Likewise, Mr. Reshid Mohammed Osman, head of the Education Ministry’s branch in the Northern Red Sea region, indicated that remarkable effort is being exerted to establish readers’ clubs in all schools. Readership is also the sound means towards language mastery, as well as educational and other intellectual pursuits, he added.

Mr. Ahmed Jaefer, head of the NUEYS branch in the region, disclosed that the Union is striving to promote readership among its members in collaboration with stakeholders.

Reports indicate that Book Fair is being conducted for the third time in the Northern Red Sea region.