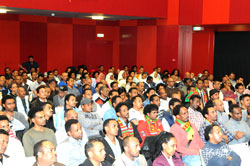 Asmara, 9 April 2013 – Eritrean community members in Switzerland have expressed readiness to play major role as regards foiling external conspiracies. They made the pledge at a meeting conducted last Sunday in Zurich city, during which they voiced staunch resistance against anti-Eritrea agendas and said that they would back up the national development drive.

Speaking at the effervescent meeting, Mr. Yemane Gebreab, Head of Political Affairs at the PFDJ, pointed out that the conspiracies targeting the nation are longstanding and characterized with form change, and that they all ended up in fiasco thanks to the prevailing spirit of resistance and unity on the part of the Eritrean people. He further elucidated that the priority of the Eritrean government at present is ensuring equitable benefit of the citizenry from the Homeland’s resources vis-à-vis the efforts being exerted towards registering economic headway.

Moreover, the PFDJ official indicated that the community members in general and youths in particular are due to back such national endeavor through investing their financial resources and expertise, besides bequeathing cultural and national values to the young generation.

Also speaking at the meeting, Mr. Shileshi Idris, head of community affairs in the Eritrean Embassy, reiterated the community members’ readiness to participate in State affairs.