Certificate of Merit to linguistic Works of Two Decades 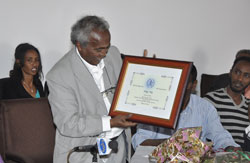 Presentation of a certificate of merit for the overall literary works of Mr. Tekie Tesfay was held on the 11th of April 2013 at the hall of PFDJ’s head office. On the occasion in which PFDJ officials, authors and researchers as well as invited guests took part, Mr. Tekie received the certificate of appreciation from Mr. Alamin Mohammed Saied, Secretary of the PFDJ.  Though an Engineer by profession, Mr. Tekie has been among the prolific writers in Eritrea. He recently published a first of its kind English- Tigriyna dictionary. His contribution towards the development of Eritrea’s literature and particularly that of Tigriyna language makes him among the leading literary figures of the country.

The recently published English-Tigriyna dictionary of large volume is indeed a very comprehensive linguistic asset. The precise translations and in-depth clarifications of vocabularies makes this long-awaited book a worth having tool for writers, academicians, and ordinary users. From this book, one could not only have the benefits of precise and to the point translation but could also learn appropriate usage of the source language.

There have been different bilingual dictionaries published by different authors much earlier of this groundbreaking work and their contribution is not to be viewed lightly. This newly published English-Tigrinya dictionary has more than 65 thousand well-defined entries. The publication of such a dictionary in fact makes Mr. Tekie’s contribution very outstanding of such like efforts made by other authors.

Simplicity and clarity of language and organization of the entries gives such a book an added value. There are a number of qualities that call one’s appeal in using this dictionary as a means of reference.  The definitions given to some entries alleviate the pains of writers who used to struggle in a search of an equivalent word.

Present at the occasion, Mr. Zemhret Yohanness, Head of Research and Documentation at the PFDJ said that struggling in linguistic works for a number of years is indeed a very demanding task but the author’s achievement attested the overpowering passion towards the development of local languages.

Mr. Tekie Tesfay on his part expressed his appreciation to the PFDJ for its long-standing support towards making the publication of this dictionary a reality. He also shared views as regards the need for sustaining such assistance to other writers.

Mr. Alemseged Tesfay, Writer and researcher, also expressed appreciation for the overall works of Mr. Tekie and particularly for the solutions he brought in giving equivalent and appropriate definitions to some entries which were not easy to exactly translate.

Along with the ongoing linguistic works by different authors, initiatives have been taken to change such publication works into electronic dictionary and among which include a multilingual dictionary know as Eri-dictionary by Abrhe Yemane. Apart from the works of Abrhe Yemane,  Fitsum Gaim, an instructor of Computer Science at the EIT, has already designed different Geez applications such as GeezIME, GeezBraille among others and such like  initiatives have also been taken by other software designers. The overall innovative works and development of electronic dictionaries have already laid a foundation for the development of electronic dictionaries. This newly published dictionary would also have a chance to be developed into an electronic one.

The Fred Hollows IOL Laboratory: The first of its kind in the region