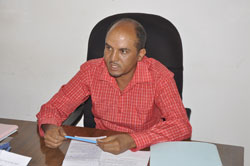 Asmara, 18 April 2013 – The Ministry of Labor and Human Welfare has called the citizenry to extend a helping hand towards ensuring the necessary social warmth for orphaned children who are growing up at government expenditure on the basis of group homes. Mr. Musie Hadish, child welfare expert, pointed out that child-oriented welfare activity was launched under the umbrella of the Ministry in the year 1992 through the establishment of an orphanage. He further indicated that group homes became the center of focus as orphan rehabilitation strategy nationwide ever since the realization of its positive impact in Dekemhare and Mendefera in 1997.

Reports indicate that orphaned children are patronized at the orphanage until they complete their 5th year of age, then they are sent to group homes, which comprise 10 to 12 members taken care by a tender. Moreover, the Ministry organizes training courses to such children and encourages their academic pursuit, besides the effort it makes to rehabilitate them among their siblings at their age of adulthood.

Mr. Musie disclosed that a number of nationals and institutions have already adhered to the norm of entertaining and supporting children in group homes, and that endeavors have been made to enable some of the children become beneficiaries of land, both for residential and agricultural purpose.

There existed 22 group homes nationwide in 2010, the current number of which stands at 12 following the rehabilitation of juvenile orphans among their relatives.