Pedestrians called upon to abide by traffic law 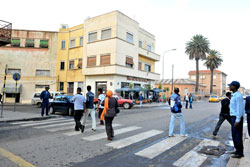 Pointing out that maintaining the necessary discipline of pedestrians is a vital prerequisite in lowering traffic accidents, Lt. Colonel Tadesse Berhane, Commander of the Office, called on both government bodies and nationals to raise their awareness to this end. He further indicated that Traffic Police members are currently engaged in popularization campaign to this end in Asmara city as of the 12th  of this month, Lt. Colonel Tadesse Berhane also  called on drivers to demonstrate active collaboration in the process.

The campaign targets lowering traffic accidents through promoting Proclamation No. 154/2006 regarding use of zebra crossing, and it is witnessing remarkable outcome, according to reports.

Among the city residents, Mr. Tesfasilasie Gebregziabher and Ms. Haimanot Abai expressed satisfaction with the ongoing campaign, and said that it would have significant input in nurturing the desired behavioral change. They further called on the citizenry to extend a helping hand in this regard.