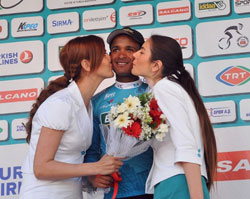 For the last four-three years Eritrea is getting international cycling recognition through its young athletes. As the country has the tradition of cycling since the Italian colonialism, it is no wander for the Eritrean athletes to emerge victorious in different international competitions.

Daniel Teklehaimanot, Natnael Berhane are now world class athletes with colorful victories both in the region and at international level. With that many Eritrean cyclist are currently professional players playing for International clubs. It is the belief of all Eritreans that the first batch of athletes that have become professional players will motivate other youths and enable Eritrea the hub of cycling in the region.

Currently, an International cycling competition, Tour of Turkey, is under way in Turkey. In this competition many international clubs are contesting.  Natnael Berhane, the African champion is participating in the competition representing Europcar. He is not only participating he is until today the leading athlete wearing the yellow jersey. It is our hope that he ends up that way and we observing our flag flying high in the sky of Turkey.

Natnael after winning the stage had an interview with one of the media outlets. And the following is what he has to say.

How does it feel winning the queen stage of the Tour of Turkey?

It’s huge! It was a hard stage. I didn’t expect to win for I didn’t really know what my capacities were in a climb such as this. It was a dream and that’s why I cried when I crossed the line. It was the best stage to win and I did it!

How did you do it?

We did a great team-work with Bjorn Thurau in the break. Later the team helped me a lot in the climb until I caught the rider in front (Serge Pauwels). I gave everything to win in the last meters of the climb.

What does this victory mean to you?

To win race at such level was better than I could hope for in my first year as a pro. It’s my first participation in the Tour of Turkey. It’s great. Just before, I rode the Tour of Trentino in which we had mountain already. I came here hoping to finish in the top 5 but first is even better. Now we have a jersey to defend.

Did you learn a lot this season by riding alongside champions like Thomas Voeckler or Pierre Rolland?

Yes. I do everything I can to become a rider like they are. Europcar is a great team. I used to see them on television and it’s very moving to think that now, people in Africa can see me win live on TV. A month ago (Ethiopia’s) Tsgabu Grmay, with whom I spent two years at the World Cycling Centre in Potchefstroem in South Africa and then in Aigle, in Switzerland, won a stage in the Tour of Taiwan. And now it’s my turn…

African champion Natnael Berhane (EUC) proved Eritrean cycling had come of age when he gave his country its most significant victory to date in the queen stage of the Tour of Turkey above Elmali on Tuesday.

A born climber, the 22-year-old Asmara-born outclassed the rest of the field on the final climb to Gugubeli to earn his first major pro victory, the first of such calibre by an Eritrean cyclist outside the African continent.

The elegant Europcar rider charged in the final 200 metres of the 159-kms third stage to get rid of Belgium’s Keven Seeldrayers (AST) and Turkey’s Mustafa Sayar (TRK), who came close to give the host country its first stage win on the home Tour.

Berhane also seized the GC lead with a 10 seconds lead over Seeldrayers with Sayar third, a further two seconds adrift.