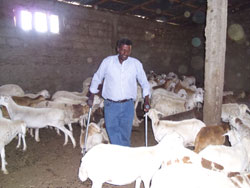 He was the only one among his friends to survive air bombardments during Fenkil Operation of 1990. He was seriously wounded and therefore lost his leg.  He started to earn his leaving with the disability he had to accustom with. But, no matter of the difficulties he learned a valuable lesson of assisting oneself from different people who received medical treatment along with him. At first, Mr. Yosief Brhane had a serious concern and uncertainty of leading his life with self-sufficiency. But, he took a bold secession to engage himself in business and later in farming activity.After deciding to set out to do something with utmost confidence, he moved from Massawa to Asmara to open a bar. But, the selling of liquors did not bring satisfaction. So, he had to look for something different that could change his leaving standards. As of 1995 he continued to work in some business activity and in 1998 he settled in his village to lead a married life. Since then, with the assistance of his father, he started dairy farm and other farming tasks. While making a steady progress, his father passed away which was a setback to his endeavors. Thus, he was forced to shoulder double responsibility.

Due to inconvenience with the dairy farm, he began poultry farming as a means of earning his living. However, he did not succeed in this new small scale business and had to look for another alternative. Hence, in 2004 he begun to raise sheep and this was his greatest achievement. With the assistance of his wife and his children, Mr. Yosief has increased the number of the sheep from 15 -to- 200. Besides, with the collaboration of the Ministry of Agriculture, he took an initiative to realize a dream he cherished in his mind for about 10 years.

What makes Mr. Yosief think of constructing a water reservoir is his overpowering aspiration of securing all water demands. So, he adheres to his long plan of constructing a water reservoir with the assistance of experts from Agriculture Minstry’s branch office in Mendefera sub-zone. He started out to accomplish a task which was previously presumed as Government’s responsibility alone.
Even though a number of people stand on his side and supported him towards the realization of the long waited dream, they were also some who advised him saying that what he has planned to do is not pragmatic so that he should reconsider his plan or else he would only exert futile efforts. At last, he realized what seems impossible despite advices he received form some good

friends to discontinue the project.

As life has taught him the ups and downs he has to surmount if he wishes to succeed, Mr. Yosief never gave up the idea of constructing a water reservoir. Through the efforts he made and the overall 500,000 Nakfa he expends, he now owns a small reservoir but suffice enough for his water needs.

Mr. Yosife’s water reservoir is expected to secure water demands of vegetables farmers in Adi-Zarna and some villages in Mendefera Sub-zone. According to experts from the Ministry of Agriculture, this reservoir has the capacity to impound 40,000 meter cubic of water.

What Mr. Yisief has accomplished is indeed very exemplary and above all the technical assistance he received from the Ministry of Agriculture was also a pushing factor towards the realization of the set out plan. All in all, this project was completed in about a one month of time.